Bob Ainsworth is contributing to the drugs debate in a positive way today and should be commended for doing so, says Mark Thompson of the Mark Reckons blog. 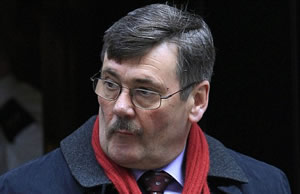 The former Labour drugs policy and cabinet minister Bob Ainsworth has come out today in favour of legalising drugs. He said:

“Prohibition has failed to protect us. Leaving the drugs market in the hands of criminals causes huge and unnecessary harms to individuals, communities and entire countries, with the poor the hardest hit.

“We spend billions of pounds without preventing the wide availability of drugs. It is time to replace our failed war on drugs with a strict system of legal regulation, to make the world a safer, healthier place, especially for our children.”

The former Home Office minister has been touring the studios this morning in advance of a Westminster Hall debate this afternoon where the issues will be discussed.

Mr Ainsworth’s approach in attempting to spark a debate on this issue has been applauded across the political spectrum with support from former deputy Conservative leader and cabinet minister Peter Lilley who wishes the issue would stop being used as a political football, as well as the senior Lib Dem MP Tom Brake.

This is notable as on most occasions in the past when a politician has spoken out about this issue in such terms there is often no support from political opponents and they are left seemingly isolated. It would suggest that careful thought and coordination has gone into the management of this call for a debate which given previous experience is perhaps prudent.

The current drugs minister James Brokenshire has responded in time honoured government fashion by dismissing the calls without properly engaging with any of the points that Mr Ainsworth and his colleagues have raised. Ed Miliband has also rushed out a statement making it clear that this is not Labour party policy.

Mr Ainsworth has been challenged on the media today as to why when he clearly feels so strongly about this issue that he did not speak out about it at the time he was a minister and was in a position to do something about it. He explained that he gradually came to change his view in office and that once he did his choice was a stark one.

To speak out and hence have to resign from government or to try and push from inside the tent to nudge policy in a more progressive direction. he chose the latter.

Given that under Gordon Brown, drugs policy actually became more authoritarian with the regrading of cannabis back to class B, the further banning of “legal highs” for which there was very little evidence to underpin the decisions, and the sacking of Professor David Nutt it is debateable how successful he was in doing this which he freely admitted in interviews this morning.

He has also been challenged as to precisely what regime should take the place of the current prohibition model. On this he has seemed a bit more sketchy suggesting different regimes for different drugs without being too drawn on the specifics but to be fair, he is simply calling for a debate in a broad way. It is not fair to expect an individual politician to have all the answers at the start of such a process.

The options can be discussed and debated as this process goes on. A good reference for this is the Transform Drugs Policy Foundation publication from earlier this year, “After the War on Drugs: Blueprint for Regulation”, which makes a number of suggestions about this and goes into great detail on all of the options.

Mr Ainsworth’s comments very strongly mirror the former Conservative minister Phillip Oppenheim, who said in an interview with me last year that he also tried to influence John Major’s government from within in a similar direction (with similar success).

The fact that numerous politicians once out of office seem willing to engage in sensible and constructive debates about the failings of current drugs policy and the possibility of radical reform does raise the question of how many current ministers feel the same way but are equally unable to speak out. There are even strong grounds for thinking this goes all the way to the top of the current administration.

Both David Cameron and Nick Clegg are on the record before they rose to high political prominence as being in favour of exploring the possibilities for liberalising drugs laws. Indeed I questioned Mr Cameron about this at a Cameron Direct event earlier this year before he was prime minister but he deftly distanced himself from his previously stated position.

Perhaps with today’s debate and politicians from all sides endorsing Mr Ainsworth’s approach we are approaching a tipping point in this country. It cannot have gone unnoticed that the largest state in the US very nearly voted to fully legalise cannabis last month and even though Proposition 19 did not pass, the medical cannabis laws in California and other US states mean it is almost de facto legal in many places there anyway.

When this is combined with recent statements from various respected international figures about liberalising drugs laws such as current and former Mexican presidents, whose country is terribly affected by the ‘war on drugs’, there does seem to be a feeling in the air that the time has come for a radical rethink.

Bob Ainsworth is contributing to this in a positive way today and should be commended for doing so.