Maybe for Rabin, the date was always 1948 or 1967, and all it took was force of will for Israel to achieve whatever it wanted. To listen to Israeli leaders now, is to travel still further back in time. The date is always 1938, the place is always Munich, the enemy is always Hitler. 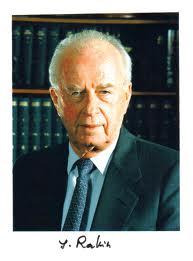 Fifteen years to the day since the assassination of Yitzhak Rabin, Daniel Elton looks at its implications for Israel’s centre-left

It was said of Leo Tolstoy, that while he was alive no man was an orphan. Fifteen years after Yitzhak Rabin’s assassination, it is more true than ever that Liberal Zionists are politically fatherless. As David Grossman put it at the 2006 Rabin memorial service:

“There is no king in Israel, our leadership is hollow.”

As the years roll by, Rabin the man recedes and Rabin the idea grows among those who long for a politically responsible leadership from West Jerusalem.

A man who seemed to be made out of the very dust of the land of Israel, he was no peacenik: Indeed his brutal suppression of the first intifada endowed him with the credibility to pursue peace.

However, his belief in the strength of the Jewish people, that the Zionist enterprise had enabled Jews to transcend their past victim status, led him to assert that Israelis were masters of their own destiny.

Maybe for Rabin, the date was always 1948 or 1967, and all it took was force of will for Israel to achieve whatever it wanted. To listen to Israeli leaders now, is to travel still further back in time. The date is always 1938, the place is always Munich, the enemy is always Hitler.

One lesson of Rabin’s death, and the subsequent withering of the Israeli peace camp of which he was leader but not a member, is that political movements with no organic basis in society face an inevitable demise.

Indeed many of Rabin’s arguments are still valid. Israel faces a simple choice: divide the land and remain a Jewish democratic state; share the land and relinquish its Jewish character; or perpetuate a regime which must resort to legalistic and semantic arguments to distance itself from Apartheid.

And with every year, as settlements are built crossing ceasefire lines and slicing through Palestinian population areas, the first option grows ever more remote. The comparative calm created by the separation barrier could have been used to reach out to the West Bank Palestinians – instead it has been used to ignore them.

But there is simply no one left to vote for Rabin’s Labor Party. While the party was ideologically based in statist planning, social democratic economics, and an approach to territorial issues based on security rather than a transcendent attachment to any particular part of Israel/Palestine, its sociological base is dying.

The secular descendents of the Eastern Europeans who dominated the Jewish community of Palestine from the 1900s until the 1950s made up the bulk of Labor voters. However, they have become the country’s prosperous elite and quite like capitalism. Labor has continually diluted its beliefs accordingly. Finally under the leadership of Amir Peretz in 2006, a former trade union boss of Morrocan descent, the party flirted with becoming an out and out social-democratic party of the poor and organised labour.

However, Peretz took on the defence ministry in a government when he wanted to be finance minister, and the mistakes of the Second Lebanon War were laid at his, and prime minister Olmert’s, feet. The party went back to its former leader Ehud Barak – a capitalist to his very core who now props up a hard right government that includes open proponents of ‘population transfer’.

Most sickening of all, he supports a prime minister, Bibi Natenyahu, who as leader of the opposition during Rabin’s prime ministership, helped to rachet up the anti-Rabin rhetoric and create the atmosphere that made assassination possible. But Barak’s Labor is impotent: its sociological base continues to decline as a proportion of the Israeli population, and it does not truly believe in left-wing politics anyway. The question is left as to why to vote Labor.

The lesson for centre-left parties around the world is stark. You can have all the right arguments. There may even be blood on the hands of your opponents. But if you cease to be the political expression of an organic part of the society which you are seeking to represent, you are doomed.

Even in the impossible circumstances of a second Rabin emerging, it would be unlikely to save the Israeli Labor Party from its seemingly imminent extinction.