The Government yesterday announced its plans to make benefit claimants work for their benefits. Under this US-style Workfare, people who have been claiming Jobseeker’s Allowance for 12 months or more will be required to do community work for 30 hours a week for four months. This could be cleaning the streets, picking up litter or painting walls. 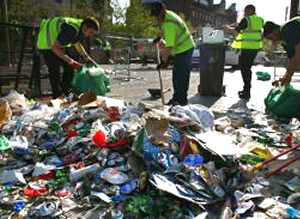 The government yesterday announced its plans to make benefit claimants work for their benefits. Under this US-style Workfare, people who have been claiming Jobseeker’s Allowance for 12 months or more will be required to do community work for 30 hours a week for four weeks. This could be cleaning the streets, picking up litter or painting walls.

Explaining the scheme, which will form part of a wider welfare reform White Paper later in the week, work and pensions secretary Iain Duncan Smith said:

“One thing we can do is pull people in to do one or two weeks’ manual work – turn up at 9am and leave at 5pm, to give people a sense of work, but also when we think they’re doing other work. The message will go across; play ball or it’s going to be difficult.”

This plan has been criticised by the Archbishop of Canterbury, who argued people could be driven into a “downward spiral of uncertainty, even despair”. The Trades Union Congress, meanwhile, argued the main problem is lack of jobs, not lack of work ethic. Also highlighted was the risk that Local Authorities, faced with 26 per cent budget cuts, may see this as a substitution for their own workers.

But just as bad, the evidence clearly shows that these workfare-style measures simply do not work. The DWP’s own research looking at workfare in the US, Canada and Australia, published in 2008, found that:

“There is little evidence that workfare increases the likelihood of finding work. It can even reduce employment chances by limiting the time available for job search and by failing to provide the skills and experience valued by employers…

At the same time, this is a relatively marginal proposal for a relatively small number of people. It is focused on those who have been claiming Jobseeker’s Allowance for more than 12 months. There are around 230,000 people in this position, a tiny fraction of the almost 5 million people on out-of-work benefits in the UK.

Cuts to Housing Benefit, Local Housing Allowances, local authorities’ Council Tax Benefit payments, childcare tax credit, and increases in the hours people have to work to get in-work tax credits will have a vastly bigger impact.

So if workfare won’t work for the long-term unemployed, what will? The same DWP research found that:

“Subsidised job schemes that pay a wage can be more effective in raising employment levels than ‘work for benefit’ programmes.”

This is exactly the model the Future Jobs Fund followed, creating real jobs that add genuine value and, in many cases, are leading on to permanent jobs. But this was one of the first things the Coalition Government scrapped.

Demos’s Liberation Welfare argued for the Future Jobs Fund model to be extended to form a Jobs Guarantee for all long-term benefit claimants. This would be a better way of getting Britain working again, not a Workfare scheme that has consistently failed wherever it has been tried.

25 Responses to “Why workfare won’t work”