The Chair of the UK Statistics Authority has identified "serious deficiencies" in DWP's use of statistics. It follows a series of corrections to the record yesterday by IDS. 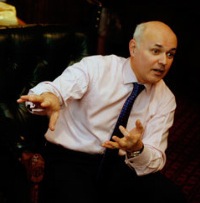 The Chair of the UK Statistics Authority, Sir Michael Scholar, has identified “serious deficiencies” in DWP’s use of statistics. The rebuke follows a series of corrections yesterday by Iain Duncan Smith to the use of statistics in a Parliamentary debate on housing reform.

Left Foot Forward has been documenting the misuse of statistics by Iain Duncan Smith, his deputy Chris Grayling, and officials in the Department for Work and Pensions for months. Today, Sir Michael Scholar has written to Patrick Casey of the Full Fact website in reply to a letter of concern about the use of secret briefings by the department aimed at select journalists.

“in the instance of the analysis of the number of people of working age who have never worked, neither this particular analysis nor the Press Release containing these statistics was made publicly available; and the source of the analysis (the Office for National Statistics’ Labour Force Survey) was not given. These were, in my view, serious deficiencies in DWP’s arrangements, and I have drawn their attention to this.”

In addition to the incident identified by Sir Michael, the DWP have issued secret briefings on housing benefit and erroneous briefings on the number of households affected by the new benefits cap.

Just yesterday, Iain Duncan Smith made three corrections to the record following a letter from Labour opponent, Douglas Alexander. His corrections concerned statistics on rents in the private housing sector where he “misled parliament“, the exaggeration of the level of discretionary housing payments, and over-stating increases in the housing benefit budget.

There remain outstanding concerns about the misuse of official figures on job vacancies and the number of net jobs that have gone to “people from overseas”.

The Guardian are along in picking up this story today:

The head of the UK Statistics Authority has issued a public rebuke to welfare ministers over their use of official statistics, warning of “serious deficiencies” in the handling of unemployment data.

Sir Michael Scholar, the head of the authority, said that by failing to show the evidence for claims made by ministers, the government risked undermining public trust.

70 Responses to “UK Statistics Authority: “Serious deficiencies” in DWP use of statistics”