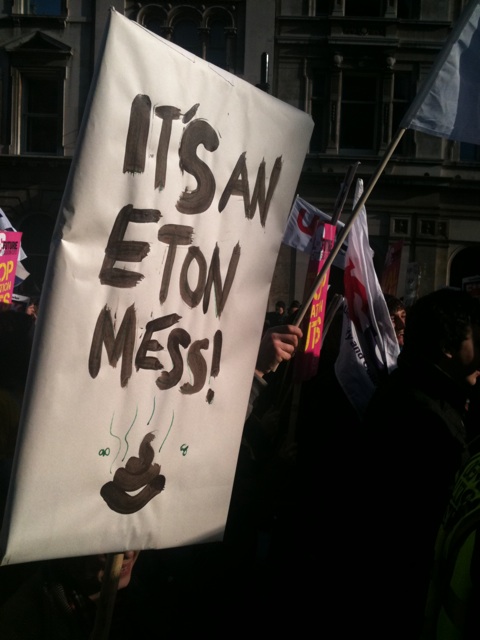 The idiots who stormed Millbank Tower yesterday and threw a fire extinguisher from the roof have rightly been condemned for their violent actions. The agitators owe an apology to the primarily peaceful students who protested in London yesterday against education cuts. The media focus has inevitably turned to policing – ignoring the important issues at stake.

EMAs of £10, £20 or £30 per week are received by 635,000 14-to-19 year olds from families with an income below £30,810. Research by the Institute for Fiscal Studies shows attainment at GCSE and A-level by recipients of EMA has risen by 5 to 7 percentage points since its introduction, and by even more for those living in the most deprived neighbourhoods. Research by RCU Market Research Services found that, “the analysis of learner data seems to provide evidence that EMA has had a positive impact on the retention, achievement and success of certain groups of learners.”

Neither the Conservative nor Lib Dem manifesto made a single mention of cuts to EMAs and the Coalition Programme was also silent. But as reported by Left Foot Forward in January, David Cameron told a Cameron Direct event in Hammersmith:

“We’ve looked at Educational Maintenance Allowances and we haven’t announced any plan to get rid of them. They do often if you go to schools and ask people what they think of them and ask young people themselves, they get quite a mixed reception actually because some people can see them as a bit divisive, but no we don’t have any plans to get rid of them.

At the time Left Foot Forward was heavily criticised by blogger Iain Dale for suggesting that this amounted to a U-turn from the more negative approach to EMAs articulated by Michael Gove and Chris Grayling. Dale pointed to a Guardian article outlining that “The Conservatives say they have no specific plans to reform the EMA” and an exchange in the House of Commons where Michael Gove had said he was “absolutely” in favour of EMAs. But like Lib Dem voters over tuition fees, students have been duped by the Tories on EMAs.

“It is utterly disgraceful really that the Government have just said that they will chop [EMAs]; David Cameron, Michael Gove both gave absolutely clear commitments before the election that they would keep EMA and the fact that they have gone back on that word I think will be seen as a bitter betrayal of young people.”