There is some good news in today’s labour market statistics. There were 2,448,000 people unemployed in the three months from July to September, down 9,000 on the figures for April to June. The number of people in employment was up 167,000 from April-June, reaching 29,189,000. 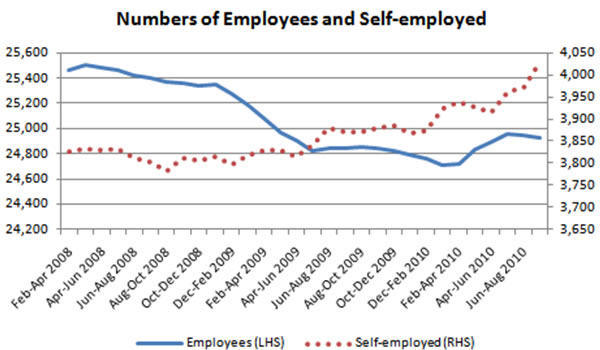 There is some good news in today’s labour market statistics. There were 2,448,000 people unemployed in the three months from July to September, down 9,000 on the figures for April to June. The number of people in employment was up 167,000 from April-June, reaching 29,189,000.

These figures continue a slow trend in the right direction that has now lasted for six months, and the favourable impression they created hasn’t been confined to newspapers that support the coalition; the Financial Times reported a “Surprise fall in unemployment”, with The Guardian suggesting:

“… the labour market may be in better shape than was feared.”

The figures are positive – and reflect the fact that the economy has been recovering from recession for a year now. What is more worrying is the nature of the recovery – dependent on self-employment, part-time and temporary work. Worse, there is no sign yet of an increase in the number of job vacancies and the number of people flowing in to Jobseeker’s Allowance is higher than the number coming off.

Self-employment grew under the last Labour government and part of the story of the recovery is the extent to which self-employment has been responsible for the growth of overall employment.

There has been no recovery in the number of employees – it stopped falling last summer, but the level has been quite steady since then. By contrast, the number of self-employed people has not stopped rising. Of course, some people have always dreamed of being their own boss, so this is not a bad thing in itself. But a weak recovery is a dangerous time to set up your own enterprise and there has to be a question mark about how long the new self-employed will stay in business.

It can be one of the “green shoots” of recovery, where companies take on temporary staff to respond to healthier order books; on the other hand, the fact they are recruiting temporary workers indicates that they are still not entirely confident about the recovery and are hedging their bets. In recent months, the two figures have started to diverge.

The number of involuntary temporary workers has continued to rise, and is now the highest it has been since the summer of 1999, but this month saw the total number in temporary work fall for the third successive month: 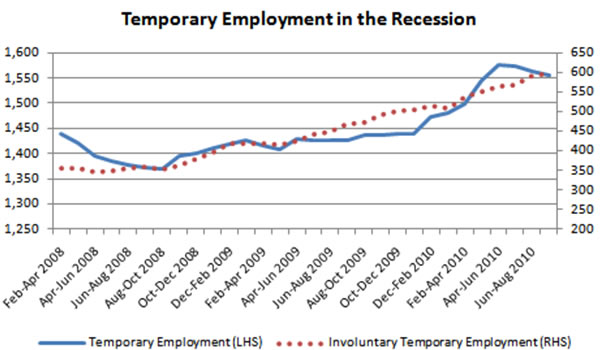 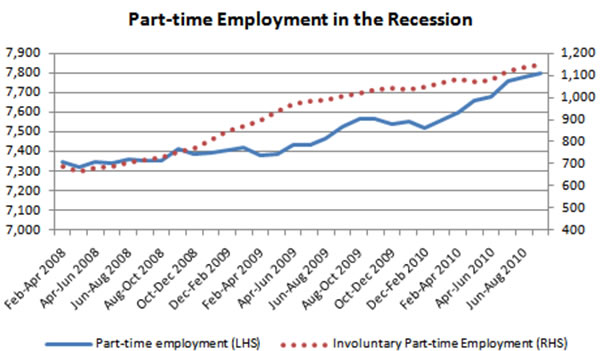 The next aspect of the labour market picture to highlight is what has been happening to the flows on to and off Jobseeker’s Allowance. In today’s figures, the inflows and outflows are both up on last month, but the picture becomes quite clear when we look at the picture since the start of the recession: 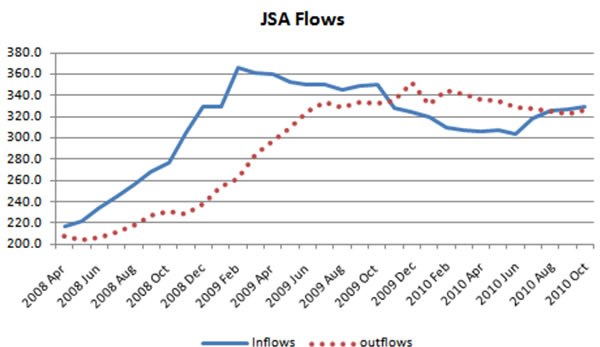 On the left hand side of the chart, we can see the impact of the recession, with many more people coming on to JSA than leaving. Late last year this reversed, but, for the second month running, we see inflows higher than outflows. This strongly suggests a weakening of employment prospects that is confirmed by the picture for vacancies.

The trend is clearly down since the late spring. The ONS figures show that there are 5.3 unemployed people for every vacancy – another sign of weakness. In recent weeks we have seen a lot of talk about the:

“Workshy … who need an extra push to get them into the mindset of being in the working environment.”

All of which ignores the fact that the number of unemployed people chasing each job has been rising since before the election and rose again this month (from 5.25 to 5.33, disguised by rounding in most reports).

13 Responses to “What kind of jobs recovery is going on?”