The chair of the UK Statistics Authority Sir Michael Scholar has ordered an investigation into the way the Department of Work and Pensions uses statistics, following a string of concerns over the nature and presentation of stats by the department - often in secret lobby briefings, with press releases and tables not made publically available on the DWP's website for scrutiny - despite the coalition’s commitment to 'throw open the doors' of public bodies. 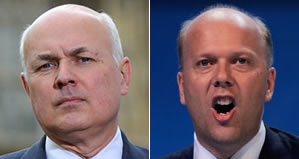 The chair of the UK Statistics Authority Sir Michael Scholar has ordered an investigation into the way the Department of Work and Pensions uses statistics. The move follows a string of concerns over the nature and presentation of statistics by the department. Despite the coalition’s commitment to ‘throw open the doors‘ of public bodies, the DWP has frequently used secret lobby briefings, with press releases and tables not made available for public scrutiny on the DWP’s website.

The investigation follows a request by FullFact.org, the independent fact-checking website which, along with Left Foot Forward, has highlighted several instances of opacity in the way the DWP distributes statistics to the press. The decision takes place as Secretary of State Iain Duncan Smith launches his welfare white paper this lunchtime.

Earlier this year, Sir Michael rebuked IDS’s deputy Chris Grayling, then shadow home secretary, for using misleading statistics on violent crime after he compared two sets of statistics without explaining that they were collected in different ways. Sir Michael said Grayling’s use of statistics was “likely to mislead the public”.

Recent instances of the DWP’s ‘secrets and lies’ include:

Nov 8 (LFF): A secret briefing on housing benefit which exaggerated claims based on out-of-context figures and pointless data manipulation;

Oct 22 (FullFact): IDS’s false calculation on job vacancies, when he said there were “something like 450,000, just short of half a million jobs every week created within the Job Centres” – the correct figure is 383,000;

Sep 16 (FullFact): Mystery statistics about welfare and benefits in the right wing press, briefed by the DWP;

Aug 20 (LFF): Secret press briefing on workless households which resulted in a series of stories about there being 250,000 households in the UK “where no one has ever had a job”.

More examples of Chris Grayling’s incompetence can be found here.

18 Responses to “Investigation ordered into DWP’s use of statistics”