This week we’ve learnt that Number 10 welcomed American welfare gurus for tea to advise on the forthcoming White Paper. Given the all-time high of 43.6 million Americans living in poverty, and a US unemployment rate that is almost double what was considered the norm in better times, what should work and pensions secretary Iain Duncan Smith take as the real lessons of the American welfare reform story? 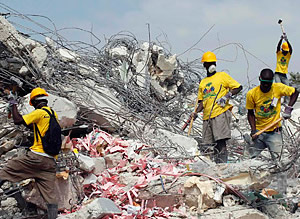 This week we’ve learnt that Number 10 welcomed American welfare gurus for tea to advise on the forthcoming White Paper. Given the all-time high of 43.6 million Americans living in poverty, and a US unemployment rate that is almost double what was considered the norm in better times, what should work and pensions secretary Iain Duncan Smith take as the real lessons of the American welfare reform story?

First, he should look into the fate of those who have fallen between the cracks. Sure, the reforms saw the number of people on the rolls tumble from 5.1 million in 1994 to just 1.7 million in 2005, but if IDS means it when he says that he wants to help people into to work, and on in life, he should not be dazzled by these statistics. Leaving the rolls is not the same as getting a job, let alone getting on and ahead.

A 2004 study estimated that at any given time, a third of former welfare recipients in the US are neither working nor have any means of visible support. More recently, the Economic Policy Institute’s analysis of the October Employment Report found that there are 3.9 million “missing workers” who are neither in employment nor on the rolls.

Little is known about how these people are coping, but the massive increase in demand for food stamps (up 17 per cent between 2008 and 2009) and the decline in adults with health insurance coverage (to just more than 50 million people) suggests that the historically low welfare rolls are hiding the true picture of suffering in modern America. It also suggests that any savings from falling rolls need to be considered against the increased long term costs associated with families living in poverty.

Second, IDS should focus on the present situation, rather than on past successes of the American welfare story. The 1996 reforms created a pro-cyclical safety net – in other words, one that works when the jobs are there. It is certainly true that at the end of the 1990s, employment and wages both went up at the lower end of the labour market.

But the system was never designed to cope with a recession so sudden and so deep as the one that hangs over us. In fact, in 2008 Congress had to act to increase the tough time limits on unemployment benefits as part of the stimulus package. It has been estimated more than half of those receiving benefits in May were only covered thanks to these extensions, which are due to expire at the end of this month.

The National Employment Law Project here in the US warns that without further legislation, an additional two million families will fall into the no man’s land between work and welfare. Given that long term unemployment is currently at around 40 per cent of the total unemployment, America’s work-based safety net looks ill-equipped to meet contemporary economic realities.

Third, IDS should look at what kind of work people are moving into when they come off welfare. It wouldn’t take him long to find the dark side of the flexible labour market: from contracting out to temping, from zero hours’ contracts to multiple part-time commitments, old blue collar jobs are being replaced by new, more fluid forms of employment.

Holding down multiple jobs, juggling erratic hours, and facing deep economic insecurity reduces aspiration and economic resilience, and it undermines the kind of stable family life that IDS says he is so passionate about.

Twenty nine per cent of American jobs today pay below the median wage, and do not provide health or pension benefits. These kinds of ‘lousy jobs’ are concentrated in low paid, low skill sectors, and are part of an increasingly polarised labour market which leaves large portions of the population working hard, playing by the rules, and yet failing to get ahead.

America learnt something really important from Clinton’s reforms: that policy interventions can make a difference to poverty. That is a crucial lesson to have learnt and one Britain should hold on to as well – but policy interventions need to reflect the reality of today’s economy, rather than imagining that what has worked before will automatically work again now.

We must hope that tomorrow’s welfare reform paper looks beyond 1990s America for inspiration.