The Independent reports that Iain Duncan Smith "misled Parliament" on welfare. This is just the tip of the iceberg in relation to DWP's misuse of statistics. 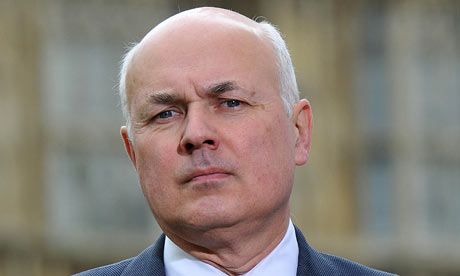 The Independent reports this morning that Iain Duncan Smith “misled Parliament” in a Commons debate on welfare – forcing officials to “correct the record”. As regular readers of Left Foot Forward will know, this is just the tip of the iceberg in relation to IDS and his department’s misuse of statistics.

“Iain Duncan Smith misled Parliament by passing off figures from a property comparison website owned by the Daily Mail as official government figures.

“In a parliamentary debate, the Work and Pensions Secretary claimed that the Office for National Statistics (ONS) found that private sector rents had fallen by 5 per cent last year. At the same time he claimed the amount local authorities paid to private landlords had risen by 3 per cent.

“But, in fact, the ONS does not collect such statistics and the figures he quoted came from the website findaproperty.com owned by Daily Mail publisher Associated Newspapers.”

Left Foot Forward and the independent Full Fact website have been documenting the Department for Work and Pensions’ detachment from reality. Other instances include:

On November 11th, IDS said “We created over four million jobs in those 13 years and…70% of those net jobs were taken by people from overseas”. The first claim was challenged by Full Fact while the use of the phrase “net jobs” was taken to task by Left Foot Forward.

On November 8th Left Foot Forward documented a secret briefing on housing benefit – timed to influence coverage of a Commons debate – which made “exaggerated claims based on out-of-context figures and pointless data manipulation”.

On October 27th, Left Foot Forward revealed that DWP had been caught peddling erroneous press briefings on the number of households affected by the new benefits cap – a Daily Mail story citing DWP figures over-stated the problem by a factor of four.

On October 22nd, Full Fact picked up IDS’s misuse of official figures on job vacancies, when he said there were “something like 450,000, just short of half a million jobs every week created within the Job Centres” – the correct figure was the lower figure of 383,000.

On September 16th, Full Fact exposed a string of secret DWP briefings to the right wing press on welfare and benefits which were not available to the public.

On August 20th, Left Foot Forward revealed that the DWP had issued a secret press briefing on workless households but refused to release the statistics.

On August 12th, IDS’ deputy, Chris Grayling, over-estimated the proportion of London households in which no-one had ever worked by a factor of three.

An investigation has been ordered into the way the Department of Work and Pensions uses releases statistics to the media by the chair of the UK Statistics Authority, Sir Michael Scholar. When the rest of the mainstream media will pick up the story is anyone’s guess.

75 Responses to “IDS’ stats rebuke is tip of the iceberg”