When Labour came to power in 1997, it promised to reverse the remorseless growth in road traffic. Within a few years, Labour's first transport secretary, John Prescott, had self-admittedly failed in this ambition, and indeed Labour had almost been sunk by the fuel-price protests. If the Left is to achieve real change in the all-important area of 'transport policy', then it is going to have to be both much more ambitious and much more savvy than was the Blair government. 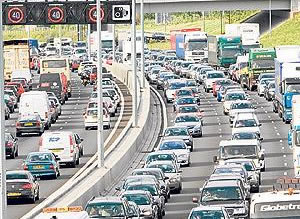 Cllr. Dr. Rupert Read is a regular contributor to Left Foot Forward; he is the transport spokesman for the Norwich Green Party, and is currently working on a book on the philosophical foundations of the environmental sciences, which will include a chapter on ‘transport science’

When Labour came to power in 1997, it promised to reverse the remorseless growth in road traffic. Within a few years, Labour’s first transport secretary, John Prescott, had self-admittedly failed in this ambition, and indeed Labour had almost been sunk by the fuel-price protests. If the Left is to achieve real change in the all-important area of ‘transport policy’, then it is going to have to be both much more ambitious and much more savvy than was the Blair government.

This is one of a number of areas where the challenge from g/Greens cannot be ignored; especially given that a future Miliband administration might well be a coalition government, this is doubly so. Here are some of the key challenges:

1) Induced traffic: For example, ‘Predict and provide‘ is dead, because building more roads puts more cars onto the roads, and puts society on a mobility and pollution treadmill that endlessly ratchets upwards.

The ‘converse’ phenomenon to induced traffic, ‘evaporation of traffic’ – see here for an interesting case – is also fascinating and important: If you propose to close roads, or to reduce ordinary road-capacity by turning some lanes into bus lanes etc., everyone asks “Where will all the traffic go?!”; the answer is that a lot of it disappears into thin air. Those traffic movements no longer take place.

The phenomena of induced traffic (and of evaporation of traffic), which has supposedly been accepted by the state since the 1994 SACTRA report, has in fact never really been acted on. To act on it would revolutionise transport, and revolutionise the country as a whole. The problem is that one has to find a way of explaining to the public the bolded concepts here… See (4), below.

An upshot of this is that this is one reason why Greens favour relocalisation, not yet more globalisation. The hypermobility model not only generates insecurity, increased emissions and the hastening of Peak Oil; it very frequently fails even at its own game, of inducing prosperity in the areas connected to.

3) Transport emissions: You simply cannot drastically reduce carbon emissions without radically changing transport policy – because transport is the fastest growing area of emissions, and there are in reality no techno-fixes for air travel etc. (See here). Biofuels are a total disaster, as I and Green colleagues predicted from the start: see, for example, here.

This is one reason why I have been very sceptical of both Milibands’ records on ‘green’ issues – because (now Labour Leader) Ed followed David in dissembling to the public about how well we as a nation did on emissions under Labour. Honesty in this area is all important; in part, to avoid lulling the people into a false sense of complacency. This is why I wrote this.

If Ed Miliband were to come cleaner on the level of action required on climate and on how little has been achieved so far (As he has seemed to imply in some remarks in leadership campaign speeches and in his comments to me as reported here on Left Foot Forward), and to make clear how transport change has to play a key role, then that would be real progress.

It would make it more imaginable that those of us (in other parties, as well as in Labour) serious about acting on transport to act on climate could be happy as part of a possible progressive ‘rainbow’ alliance in the future.

4) Reframing ‘transport’: But how is any of this to be done without infuriating the public, ‘the car lobby’, etc? That is where the work of Tom Crompton et al may come in. We need to reframe these debates. So Crompton’s recent Common Cause report is potentially invaluable. It is where it’s at, for thinking how to achieve systemic political and ‘cognitive’ change. That is what we are going to need to do, to evict Cameron from Number 10, and to be able to actually change anything once someone else is installed there.

I am currently working on a book on this, from a likeminded but more political and more philosophical perspective than Crompton’s (for a hint of the kind of approach the book will take, go to www.greenwordsworkshop.org). One of the points I make in my forthcoming book is: it is vital to achieve a reframe of ‘transport policy’ so that it is no longer even thought of as transport policy. For ‘transport’ is about getting things from A to B. But we need to be thinking, instead, in terms of satisfying human needs.

We don’t have an inherent need to transport/travel more than a limited amount; many instances of transport are actually on balance bads, not ‘goods’ (see (1), above). So long as we think (in terms of) ‘transport policy’ in terms of provision of transport modes, then we will fail to act wholistically to create a better society. We need to be making reduction of the need to travel into a priority – but that is impossible, so long as one’s dominant frame is ‘transport policy’.

If these four challenges are responded to effectively, the change to our common future will be positive and indeed epochal. If they are not, then we are in effect acquiescing to a merely mildly-reformed business-as-usual, and the consequences will be catastrophic.