DWP is under investigation from the Statistics Authority. In today's Daily Mail, IDS makes erroneous claims about the proportion of "net jobs" goings to "people from overseas". 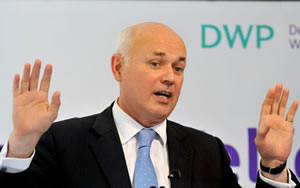 As DWP comes under investigation from the Statistics Authority, Iain Duncan Smith is at it again in this morning’s Daily Mail making erroneous claims about the proportion of “net jobs” goings to “people from overseas”.

In an interview for this morning’s Daily Mail, Iain Duncan Smith says:

“We created over four million jobs in those 13 years and…70% of those net jobs were taken by people from overseas because people in this county weren’t capable or able to take those jobs. Surely that’s a sin.”

Left Foot Forward contributor, Sarah Mulley, explains the problems with this kind of claim in an ippr briefing from August titled ‘Immigration and employment: anatomy of a media story‘. Mulley outlines that any “net jobs” figure implies far greater numbers of jobs created and jobs disappeared – one taken from the other creates the net figure. To understand the proportion of jobs that went to “people from overseas” requires a fraction of the number of gross jobs rather than net jobs.

In April, Left Foot Forward forced Fraser Nelson to clarify his own claims about the number of jobs going to foreign-born individuals. Responding to similar stories over the summer in the Daily Express and Telegraph, Sarah Mulley illustrated the problem with extrapolating proportions from net figures:

“There were 101,000 additional people in employment in April-June 2010 compared with April-June 2009. This increase was made up of 4,000 more UK nationals and 97,000 more non-UK nationals. So, a very simplistic reading of the stats (along the lines of the Express/Telegraph headlines) could be that: 97,000 of 101,000 new jobs created between April-June 2009 and April-June 2010 went to migrants. This does sound like a crazy world – it might suggest that British people got just 3 or 4 out of every 100 jobs advertised. No wonder people can’t get jobs if employers are giving 96 per cent of them to foreigners!

“Of course, this isn’t what the employment statistics tell us. There weren’t 101,000 new jobs created in this period. There were, in all likelihood, hundreds of thousands, if not millions, of new jobs created in this period. But hundreds of thousands or
millions of others disappeared, so the net impact on employment was 101,000. At the same time, millions of existing jobs were advertised (it doesn’t matter to a job seeker whether a job is new, just whether it’s available).

“For example, let’s assume for a moment that in the period in question, 9m existing jobs were advertised, 1m jobs disappeared and 1,101,000 new jobs were created (net employment gain: 101,000). So at the beginning of the period there were 10m jobs, and at the end there were 10,101,000. Let’s assume that 92 per cent (in line with the real percentage of the total working population) of the jobs that existed at the beginning were held by UK nationals and 8 per cent  by non-UK nationals. It only takes those proportions to shift to 91.1 per cent  and 8.9 per cent  by the end of the period to give 97,000 extra jobs to non-UK nationals and 4,000 extra to UK nationals (i.e. ’96 per cent  of new jobs go to foreigners!’). Small changes in employment patterns can suggest very big impacts if only net figures are considered.

Returning to Mr Duncan Smith’s interview in today’s Mail, it’s clear that the Work and Pensions Secretary either has no grasp of statistics or is misleading the public.

20 Responses to “At it again: Now IDS misleads on jobs for foreigners”