Shadow education secretary Andy Burnham today told the Commons he had written to the UK Statistics Authority to look at the government's use of statistics in school sport. Mr Burnham was speaking during the Opposition Day School Sports Funding Debate, in which he implored education secretary Michael Gove to rethink his decision to abolish School Sport Partnerships. 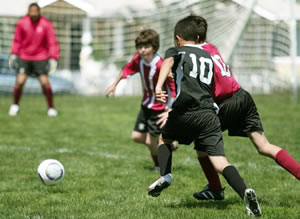 Shadow education secretary Andy Burnham today told the Commons he had written to the UK Statistics Authority to ask it to look at the government’s use of school sports statistics. Mr Burnham was speaking during the Opposition Day School Sports Funding Debate, in which he implored education secretary Michael Gove to rethink his decision to abolish School Sport Partnerships.

If the UK Statistics Authority does investigate, it will follow the probe into the Department for Work and Pensions’ use of stats pertaining to housing benefit and worklessness, which Left Foot Forward has reported on in recent months.

Only yesterday, at culture, Olympics, media and sport questions, in response to a question from Labour’s Ian Austin, culture secretary Jeremy Hunt told the House:

“We are committed to a sporting legacy for 2012 for every single child, no matter what their background or what school they go to.

“The legacy that we had from the hon. Gentleman’s Government was four out of five older children not doing any sport at all, and an Olympic-sized hole in the Budget.”

This is simply not true. When Labour came to power, only 25 per cent of pupils were doing two hours of sport a week – the figure is now 95 per cent, as was pointed out to him by shadow culture secretary Ivan Lewis:

“Does he accept that 95% of young people are participating in sport for two hours a week in schools, rather than the figure that he inaccurately quoted just a few moments ago and misled the House?”

Government ministers, all the way up to the prime minister, have also been seeking to sow confusion by talking about intra- and inter-school competitive sport and reeling off the small list of sports (which can be counted on one hand) in which provision has fallen. Mr Gove today, and David Cameron last week, did just this, saying the proportion of schools offering gymnastics, rounders, netball, hockey and rugby union was down.

No mention, though, from either Gove or Cameron, of the 37 other sports and activities included in the PE and Sport Survey in which provision rose dramatically, rose slightly or stayed constant.

The survey in question, the best way to monitor participation in school sport, is to be abolished by Gove, who today had the brass neck to say:

“I must correct the Honourable Member [Mr Burnham], who was only using estimates [for figures on school sport for when Labour came to power]… 2003/04 was the first year in which we had accurate figures… The figure is from a genuine survey.”

What, then, does this say about the veracity of school sports figures for future years?

Left Foot Forward has published several reports on this issue, even before the full scale of the cuts to school sport became apparent last month; as Mr Burnham concluded: