In the wake of the Linda Norgrove kidnap tragedy, Matthew Carn looks at the doctrine of force projection and asks if any regime now fears Western intervention. 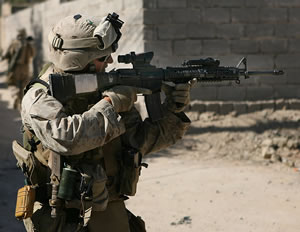 Today, a shocked David Cameron revealed that kidnapped British aid worker Linda Norgrove may have been killed by ‘friendly fire’ in a botched rescue attempt; as questions are again asked about the war in Afghanistan, Matthew Carn looks at the ‘force projection’ doctrine and asks if any regime now fears Western intervention

Last Sunday marked the 17th anniversary of the clash in Mogadishu between soldiers of the United Nations, operating under the auspices of UNOSOM II, and Somali fighters opposed to their presence. Despite the multinational force it was, as its predecessor UNOSOM I had been, a primarily American operation led by US troops and watched over by Washington.

That day and night in 1993 saw 19 young Americans lose their lives together with more than 1,000 Somalis and, while it was a tragedy, the aftermath codified an issue that has re-emerged starkly in the post 9/11 world of defence. The doctrine of force projection is something that is often left unspoken by commanders on the ground but is present in every strategy and intensifies exponentially the higher one goes in the chain of command.

In its most basic form force projection is the ability to convey one’s power over a distance upon one’s neighbours and adversaries by threat or, if necessary, direct application of armed force. It is one of the most fundamental principles in warfare and it is used every day to maintain peace, intimidate opponents, and bend others to one’s military and political will.

It goes without saying that success in force projection has traditionally varied in proportion to the size of a nation’s military but it must also be justified when action is necessary. If one’s forces are shown to be far less militarily effective than their numbers suggest then the entire doctrine simply falls apart.

At present Afghanistan is a conflict that hangs precariously in the balance. Only nine years ago it was deemed unthinkable to leave it in the hands of the Taleban because of its undeniable role it had played in the September 11 attacks. Nothing has changed with respect to this – the Taleban have not changed their ideology and have instead been strengthened by radicalised fighters opposed to the actions and presence of NATO.

The plain truth is that the Taleban have demonstrated the lessons that were not learned in Somalia: the West and its undeniably vast military might can be beaten by a force perceived to be inferior in almost every way. If political will breaks and Afghanistan is lost then this could very well be the end of Western military hegemony and its long history of successful force projection. Why, after all, would any nation fear Western intervention now?

5 Responses to “Will any regime fear Western intervention now?”