George Osborne said the Coalition had moved Britain out of the "financial danger zone". But the Irish experience shows that the planned cuts will make matters worse. 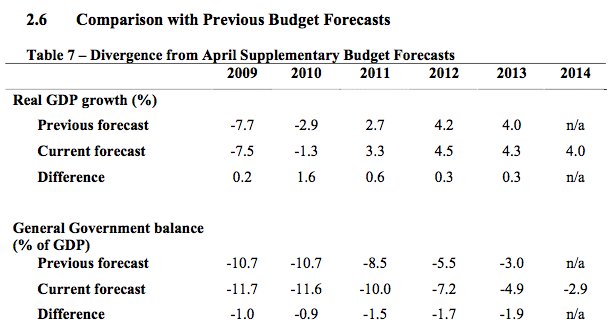 George Osborne told the Today programme that the Coalition had moved Britain out of the “financial danger zone” and contrasted the UK’s economic performance with that of Ireland. As Mr Osborne prepares to make £83 billion of spending cuts in two weeks time, the truth is that Ireland tried exactly the same approach with dire consequences.

Ireland’s 2009 supplementary budget set out a package of spending reductions and tax cuts worth €3.25 billion. Measures included reducing jobseekers allowance, cuts to childcare allowances, and reductions in spending on the voluntary and charitable sector. The package aimed to reduce the Government deficit to 3% of GDP by 2013. Mr Osborne plans to reduce public sector net borrowing from 11% last year to 3.5% in 2013-14, a similar pace to the Irish experience.

But as the Table below from the 2010 Budget shows, the current forecast of the Irish deficit exceeds the previous forecast in every year. The cuts didn’t work and the Irish government were forced to announce further measures in the 2010 Budget including pay cuts for public sector workers and cuts to social welfare programmes.

“Were it not for this once off spike we would have broadly met our budget target for 2010. I want to stress today to all, including our European partners, that Ireland remains fully committed to reducing our deficit below 3% of GDP by 2014 as agreed.

The phrase “broadly met” is telling since it implies a deficit of 12% excluding the bank bailout. This is above the current projection for 2010 and over 1% higher than the earlier pre-cuts projection.

In 2009, Mr Lenihan called his measures, “decisive actions to put this economy on the road to renewal and demonstrate that we have the ability to make the right choices for everyone in this country.” Sound familiar?