The governement suggests the distributional impact of the spending cuts is less regressive than if these important areas were also included; but are they right? 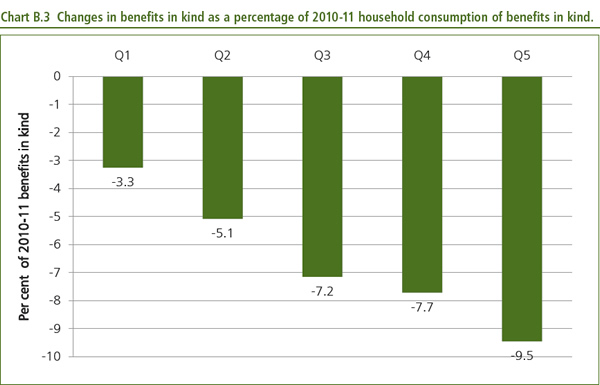 It was striking that George Osborne made so much again of his claim that the Comprehensive Spending Review (CSR) had met the fairness test of “progressive austerity” – so that even his spending cuts would hit the better-off harder. Back in June, his emergency budget ‘fairness’ claim unraveled in 24 hours. Are his claims to a “progressive” spending review any better? The immediate answer appears to be no.

Howard Reed and Tim Horton had previously provided the most comprehensive analysis to date of the current distribution of public spending. The report, published by the TUC, showed that, based on what we knew prior to the CSR about government commitments, proposed spending cuts seemed very likely to hit the poorest much harder. (Perhaps unsurprisingly, since public spending is ‘pro-poor’, giving more help to those on lower incomes).

Today George Osborne claimed he had avoided that consequence. Yet he has published figures and documents which again prove that he has not done so. Reed and Horton will update the analysis based on the CSR numbers. But it is possible as a first step to set out why the Treasury’s claims in the distributional annex published today do not stand up.

Firstly, on tax and benefits, his chart B.5 on page 98 again shows he had preannounced measures which (thanks to Alistair Darling’s policy proposals) hit the best off harder – but the green bars show very clearly that today’s proposals are worst for those at the bottom and better at the top, with a regressive gradient across the income distribution.

What about spending on services? How does the Treasury manage to produce a graph (chart B.3 on page 95) which purports to show the greatest hit on services to the most affluent quintiles? Through very creative presentation.

If the Government wanted to turn the overall pro-poor distribution of public spending to its advantage, you might then say ‘why not draw a graph showing those changes as a proportion of the lost benefits in kind’. Which is what the distributional annex does.

But this makes no sense at all for anybody asking ‘what is the distributional impact of the CSR’.

In our view this is conceptually flawed: you cannot add the value of public services received to someone’s household income in order to produce a grand measure of their standard of living, since the public services people receive are related to their underlying needs. It doesn’t follow that someone is better off because they are ill one year and so receive more NHS services than someone who is fit.

If we want to know who is hit hardest – and who escapes most easily – in the real world we surely want to know instead what proportion of their income the lost services represent. Imagine a household has to pick up the cost of services lost out of its own pocket; what matters is how much this is relative to their household income. This will be a very real consideration to people facing, say, rises in bus or rail fares because of spending cuts reducing the public subsidy.

The impact for the top 40 per cent is relatively lighter – that on the bottom 60 per cent worse: 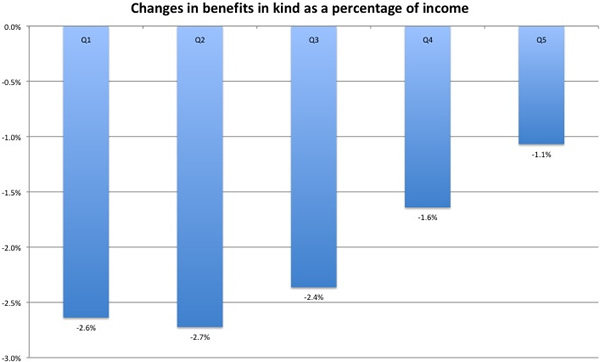 Here are the tables used:

A further concern is that today’s analysis leaves out many more areas of public spending than seem necessary, including only half of public spending in the analysis. For example, it omits all Home Office spending (including policing) as well as other things like support for rural communities, and all broad “public goods” such as defence and environmental protection. Clearly, the government does not think that these areas do not have public value for UK citizens!

The Treasury suggestion that methodological complexity makes it most sensible to exclude the value of these public goods from consideration should be challenged. A perfectly sensible approach is to include the value of public goods on a flat-rate basis – except where data is available (as in the case of the British Crime Survey) to allocate public spending more specifically. (The Fabian/Landman research was able to allocate 70 per cent of public spending on a household distribution basis, with a flat-rate allocation of remaining spending).

This matters because excluding the public value of so much of public spending changes the outcome: it suggests the distributional impact of the spending cuts is less regressive than if these important areas were also included. The government has explained why the distributional fairness test matters.

But they will need different policies if they want one of their future claims to have met it to stand up for 24 hours.