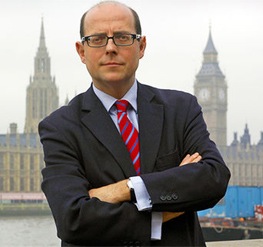 BBC Political Editor, Nick Robinson, picked up the ‘Blogger of the Year’ prize at the Editorial Intelligence Comment Awards this morning beating fellow nominees Paul Waugh of the Evening Standard and Coffee House’s Melanie Phillips. The gong will send howls of derision around the blogosphere.

Iain Dale has previously lamented the shortlisting for this year’s awards which excluded any independent bloggers but the winner is even more puzzling. This blog has nothing against Nick Robinson’s broadcasting (although others do) but even his nomination for the best blogger award is a real stretch. Nick Robinson has:

– A low frequency of posts. In July, for example, Robinson only posted eight blogs and often goes three to four days without posting. His archive suggests that his writing is an afterthought to his broadcast work.

– His Twitter presence fairs poorly against his fellow nominees. Despite @BBCnickrobinson having more than 23,000 followers it offers no interactivity, simply broadcasting links to his latest posts. This morning, the magnanimous Paul Waugh tweeted on the importance of interactivity. He said:

“Blogging’s like sex cos: to do it well u need to do it frequently, really enjoy it and take careful note of feedback.”

– The content of Robinson’s posts compares poorly to others, lacking detail and, crucially for blogging, virtually no hyperlinks to other sites.

By contrast, Paul Waugh is a prolific blogger regularly posting six or more stories a day; uses twitter for microblogging and interacting with his audience as well as promoting his pieces; and has an uncanny ability to be first to a story. For example, he was first to tip John Healey as the ‘Dark Horse‘ of the shadow cabinet elections, got his own pictures of the champagne ban being breached at the Tory Conference, and produces interesting detail on the intricacies and costs of ministerial work in Whitehall.

Some of the other awards made more sense:

– The brilliant Johann Hari from the Indy picked up the Environment Commentator of the year award – although his range is much broader including this terrific piece today on the cuts.

– The FT’s Gideon Rachman is Foreign Commentator of the year

– Danny Finkelstein picked up Political Commentator of the year

The event ended with Channel 4 News’ Jon Snow making an impassioned speech against the lack of nominated women. He pointed out that five of the 13 categories had no shortlisted women while the only women to pick up an award was Anne Spackman, Comment Editor at the Times, for the Best Comment Pages award.