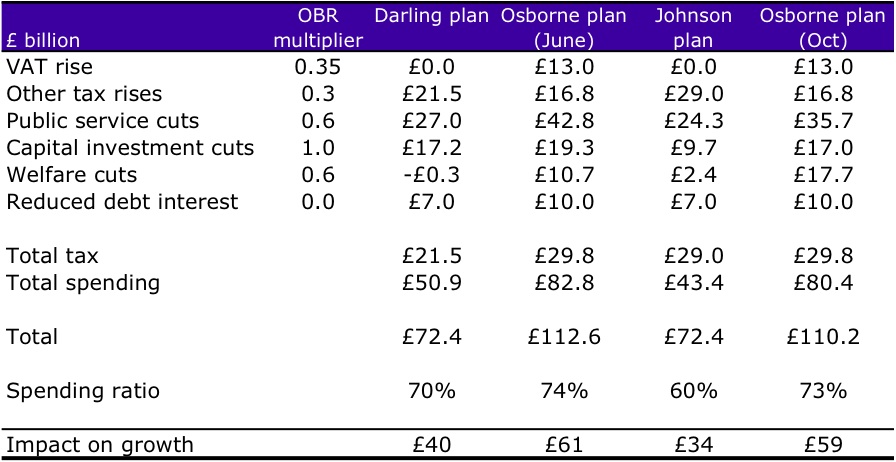 Both David Cameron and Ed Miliband make speeches today on growth to the Confederation of British Industry. The impact of any pro-growth policies will, at best, offset the negative impact on growth of the spending review which is set to impact 490,000 public sector jobs and a further 200,000 in business and financial services. Analysis from Left Foot Forward shows that last week’s Spending Review will remove around £60 billion from the economy.

Last week the Institute for Fiscal Studies broke the Government’s plans down into tax rises, public service cuts, capital investment cuts, and welfare cuts. By plugging in multipliers prepared by the independent Office of Budget Responsibility, it is possible to show that the Coalition’s spending plans will take £59 billion from growth. By comparison Alan Johnson’s plan, which stuck to the timetable set out by Alistair Darling but put a greater emphasis on tax, would have impacted growth by the lower figure of £34bn.

The October Spending Review – which announced a greater focus than George Osborne’s June Budget on welfare cuts to reduce the impact of cuts on public services and investment – mitigated the impact of cuts by only £2bn. By contrast, Alan Johnson’s new approach reduced the impact on growth from £40bn in Alistair Darling’s plan to £34bn.

“And because of our tough but fair decisions to reform welfare, and the savings we’ve made on debt interest…

“… I am pleased to tell the House it has been possible – and the average saving in departmental budgets will be lower than the previous Government implied in its March Budget.”