When former UCL student Umar Farouk Abdulmutallab tried to detonate a bomb on Christmas Day 2009, the spotlight was on radicalisation of university students. 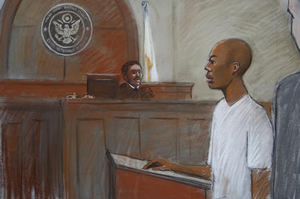 When a former UCL student, Umar Farouk Abdulmutallab, allegedly tried to detonate a bomb aboard a Detroit-bound airliner on Christmas Day 2009, radicalisation of university students was placed in the spotlight. However, throughout the academic year  2009/10, the same ideology that allegedly inspired Abdulmutallab was allowed to spread on another London university campus, just down the road from UCL.

Lucy James, my colleague at Quilliam, recently conducted a ground-breaking study (pdf) of the activities of the Islamic Society (ISoc) at City University, London. She describes how, during the 2009/2010 academic year, a small clique of extremists was able to take over the leadership of the ISoc and use it as a platform to spread their politicised, intolerant and, at times, violent interpretations of Islam.

“Because this is what Allah and his messenger [swt] have taught us and this is the religion of Allah and it is Allah who legislates and only Allah has the right to legislate.”

On another Friday, Patel delivered a khutbah in which he appeared to agree with a key element of al-Qaeda’s ideology, claiming that jihad (literally: struggle) could involve offensive violence:

“When they say to us that Islam was spread by the sword, and there is no such thing as jihad, we say to them ‘no’. Islam believes in defensive and offensive jihad. The Qur’an is the proof, as is the Sunnah.”

The ideology advocated by Patel, Salafi-Jihadism, is a hybrid of Saudi-style Wahhabism and modernistic politicised Islamism. One of its principle English-language proponents is American-Yemeni ideologue Anwar al-Awlaki, who has been linked to Faisal Shahzad, the Times Square bomber, Major Nidal Hasan, the Fort Hood shooter and Abdulmutallab, the undie-bomber.

The USA considers al-Awlaki so dangerous that President Obama recently authorised his assassination. During Patel’s premiership, the ISoc attempted to play a video message from Anwar al-Awlaki at one of their events.

Everybody, of course, has the legal right to freedom of speech within the law, and that includes Saleh Patel and his clique who dominated City University’s ISoc. But this does not mean that Patel’s words were merely harmless rhetoric. The LGBT society complained of feeling scared as a result of the views and behaviour of Patel’s ISoc, and some Jewish students complained of feeling intimidated. The ISoc, under Patel, spread a Salafi-Jihadist ideology which had very real, negative consequences for other students on campus.

Moreover, the security threat presented by militant Islamism and Salafi-Jihadism was recognised in the National Security Strategy, announced yesterday, which warned that Britain’s “principal current national security threat” comes from al-Qaeda and its Islamist-inspired terrorism. The National Security Council’s analysis was reinforced by events in Chechnya this morning.

According to reports, at least three Islamist rebels attacked the Chechen parliament building in Grozny, leaving at least two security personnel and one civilian worker dead. All of the attackers were killed, with two reportedly blowing themselves up. Such attacks are made more likely if extremist views of the kind propagated by City University’s ISoc President last year are allowed to spread unchallenged.

City University has now recognised the danger of what was happening on campus and is trying to address the problem. However, as my colleague’s report emphasises, now is the time to learn from their experiences to ensure that they do not reoccur on another campus, elsewhere in the country.