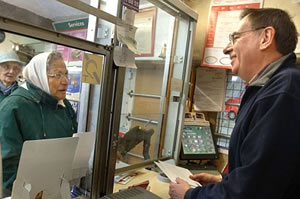 Steve Webb has an honourable record of campaigning for better state pensions and a better deal for women in particular. As a former staff member of the Institute for Fiscal Studies (before it attracted the ire of his party leader) and social policy professor he comes to his job as pensions minister with more knowledge of pensions and benefits than many of his predecessors.

He will know therefore just how difficult a challenge he has set with his plans to introduce a new universal state pension that will lift pensioners above means-testing levels.

There is much to be said for such a policy, but while it may be a cliché, this is a proposal where the devil will be in the detail. There is no magic pensions money tree, and if some people are to benefit, then others will have to lose if we assume that George Osborne has not suddenly discovered an obscure Treasury basement stuffed with gold.

So what might be involved? At present pensioners have three broad sources of cash from the state:

1. The basic state pension (currently £97.65 a week for single people and £156.15 a week for couples) is a contributory benefit. You need to have enough full National Insurance contributions to qualify for the full amount.

Most people who miss out are women – either because they paid a reduced married rate of NI, were in part-time work below the NI threshold or because of broken work records.

2. Means-tested benefits of which the most important for pensioners is pensions credit. This aims to ensure that single pensioners have an income of at least £132.60 a week or £202.40 for two people living together.

3. The least understood part of the pensions system is what is technically known as Additional Pension, but this a catch-all for a range of different bits of state pension provision. The best known of these is still SERPS – introduced by Barbara Castle as an earnings-related pension for employees who did not work for a company that provided a pension.

This was severely cut back by the previous Conservative government, and then transformed by Labour into the State Second Pension, S2P in the jargon, which overtime is becoming a flat-rate top up to the basic state pension.

Secondly the basic state pension and the additional pension will be rolled into one and set at a level above pensions credit, thus getting rid of a great deal of means-testing.

This has obvious attractions. Poorer pensioners would no longer need to go through means-testing (and many don’t claim) to get a pension income above the poverty threshold. It would also encourage people who are working to save for retirement as their savings would not count against mean-tested benefits.

But while scrapping means-testing would save some administrative costs this would not provide enough to fund a £140 basic pension for everybody.

The most complex bear-trap is that not everyone builds up an additional pension. Occupational schemes can opt out and get smaller NI contributions in return, and the last Conservative government gave a new right for individuals to opt out and instead receive state contribution to a private pension – though what seemed a good offer at the time has turned out to be poor value by the time people actually retire.

The problem that Steve Webb faces is therefore two-fold.

If everyone is to get a new universal pension of £140, who is going to pay for it? Those who have built up a state second pension that gives them an income of more than £140 will not be happy if they lose it. Wrapping up universal pensioner benefits such as winter heating help would simply repackage existing payments.

Secondly people who have opted out of the state second pension and built up a private or occupational pension will do rather well if their state pension gets bumped up to pension credit level as they have no S2P to lose. Of course you could introduce the equivalent of means testing for those who have opted out, but then you lose the supposed simplicity of the new approach.

Nothing is ever simple in pensions reform. This move is undoubtedly well-intentioned, and if achievable in a fair progressive way would be a real advance. But there are also real difficulties, and if this move is to be supported we need good answers to the key question: who pays?

11 Responses to “Problems remain for the government over pensions reform”