The Coalition has attacked Alan Johnson's deficit reduction plan. The truth is that it is costed and will result in a much lower impact on growth. 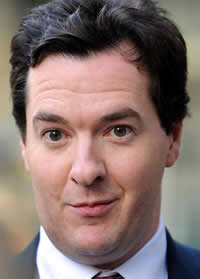 The usual suspects have their knives sharpened for Alan Johnson this morning. The Tories have accused Labour of a “black hole” over their revised deficit reduction plans while the Lib Dems claim that Johnson’s plan will result in “crippling interest payments“. Meanwhile, the Mail accuse Johnson of wanting to “tax and spend Britain out of economic mire” while the Telegraph takes a similar line and says “Labour would tackle the current economic malaise by raising taxes and continuing to spend“. The truth is that the shadow Chancellor’s plan will still mean billions of cuts, but it will result in a much lower impact on growth than George Osborne’s approach – a £34 billion cut to growth compared to £59bn.

The June Budget outlined that Alistair Darling’s was committed to deficit reduction of £73 billion by 2014-15 compared to £113 billion for the Tories. Labour stuck to this yesterday but changed the ratio of spending cuts to tax rises from 71:29 to 56:44. Labour’s planned tax increases included the 50p tax rate and rise in NICs that was due to deliver £21 billion. The proposed tripling of the bank levy, extension of the bankers’ bonus tax, and adoption of the Coalition’s capital gains tax increase adds a further £7.6bn to the total so that it now equals £28.6bn.

On the spending side, Paul Waugh expertly explains how the £52 billion of spending cuts needed by Labour comes down to £34 billion in contrast to the Conservative’s £61 billion. Both sides will need to set out how they will achieve the bulk of this. Left Foot Forward has broken down the figures even further and plugged in the OBR multipliers that Johnson alluded to in his speech. Mr Johnson said:

“And we know from the Office for Budget Responsibility’s own figures that a spending cut hits growth twice as hard as a tax change – three times as hard when it’s capital spending.”

The multipliers – which have been criticised as “a little on the low side” – are contained in Table C8 of the June Budget. Our analysis shows that, using the OBR’s own figures, George Osborne’s plan will reduce GDP by £59 billion while Johnson’s plan reduces GDP by the far lower figure of £34 billion.

And far from causing “crippling interest payments,” Labour’s slower plans will only increase debt interest payments by £4 billion (see Table C13) – a figure dwarfed by the additional hit on GDP of the Coalition plans.