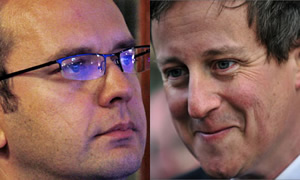 Information obtained through Parliamentary questioning on Prime Ministerial business has revealed a striking pattern amongst No 10 special advisers meeting with Rupert Murdoch’s News International (NI) newspapers and media outlets. The data, cataloguing external meetings held between special advisors and the media, and ministers and the media, show a clear pattern of preference towards Rupert Murdoch’s media empire.

The most high-profile example is Andrew Coulson, Director of Communications at No. 10, who had external meetings with News Corp outlets on four occasions from May 27 to August 14 – 50 per cent of all his declared meetings in that period.

In May, the release shows that David Cameron met with Rupert Murdoch soon after the election (where Murdoch was alleged to have snuck into No 10 via a back door). The data was obtained by Tom Watson MP, who submitted requests for “office external meetings, overseas travel, hospitality and gifts” received by all government ministers and special advisers.

From May 13 to July 31, all registered special advisors at No 10 had 11 meetings with NI outlets – whilst only meeting with Channel 4 once in that period, the BBC six times, The Guardian five times, The Daily Mail and Mail on Sunday five times, and only had an external meeting with the Telegraph, a traditional Tory paper, twice.

The information reveals that No 10. currently houses 19 special advisers, despite pledging to reduce their numbers in the run-up to the election to ‘cut the cost of politics’. Elsewhere – at the Department of Culture, Media and Sport, ministers met NI papers and outlets on three occasions between May 13 and July 31, on top of one lecture and one additional lunch.

At the Department for Communities and Local Government, there was one external meeting between Eric Pickles and NI, this time with the News of the World. Francis Maude and Baroness Warsi (at the Cabinet Office) held external meetings with The Sunday Times and News of the World during the same period. Foreign minister David Liddington received two hospiltality dinners from NI newspapers in July and special adviser David Hass had a lunch courtesy of The Sun on July 29. At the Home Office, special advisers Nick Timothy and Fiona Cummingham met with NI outlets on three occasions in May.

Crucially, the Department for Business, Innovation and Skills has also  yet to release its external meetings – the department, with minister Vince Cable, that will ultimately make a decision on the NI takeover of BskyB.

Tom Watson MP, who requested the information, was critical of the way in which No 10 released the data on special advisers and ministerial meetings. He said that the information was being released intentionally late to minimise wider coverage and scrutiny. He said:

“It makes it hard for lobby journalists to write the story. We’re going to publish every document we find but the House of Commons library have not been given them yet. Some departments have published their lists and we’re tracking them down for you. Hope you find it useful.”

• All the data is available on Tom Watson’s website.

29 Responses to “The revolving door between News International and No. 10”