The English Defence League is strengthening its ties with the American Tea Party Movement. Melanie Phillips is an inspiration for the Tea Party's anti-Muslim leader, Pamela Geller. 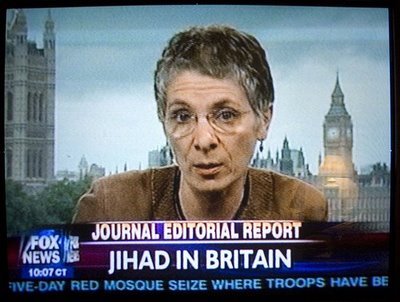 ﻿The Observer reports today that the English Defence League (EDL) is strengthening its ties with the American Tea Party Movement.

In particular, the paper reports that Pamela Geller, the “darling of the Tea Party’s growing anti-Islamic wing” and leader of opposition to the ‘ground zero mosque’ – is advocating an alliance with the EDL.

This follows an interview with Newsweek when Geller expressed support for the EDL, even after they attacked British police officers.

Left Foot Forward has learned that Geller’s inspiration is none other than the British Daily Mail and Spectator columnist, Melanie Phillips.

On her blog, Geller describes Phillips as “a great intellect and truth teller, a woman I greatly admire” and says that Phillips’ book, ‘Londonistan’, is “the most compelling book on Islamic fundamentalism, violence and intimidation in the West.”

Geller has posted videos of a talk by Phillips, and quotes Phillips as telling a US audience:

“There has been over the past 20 to 30 years an evisceration of British National identity and values which has created a cultural and moral vacuum being exploited by Radical Islamism which has come to fill that vacuum.”

Phillips has written defensively of the English Defense League in the past, writing of one clash between EDL and anti-fascist protesters:

“In any street altercation like this, the anti-Islamist demonstrators must be aggressors and those who confront them must be either their victims or heroic anti-fascists.”

“The Islamists have an incentive to provoke a violent reaction by white groups calling themselves names like English Defence League — simply in order to produce yet more demonisation of the anti-Islamists.”

She has criticised former Communities Secretary John Denham for not ‘critically engaging’ with the EDL, and called his comparison of the EDL to Mosley’s Blackshirts “absurd” and “offensive.” Phillips continued:

“The label of the ‘far right’ toxifies everything it touches. There is now a real danger than anyone who opposes Islamic supremacism will find themselves vilified not only as ‘Islamophobes’ but also as BNP fellow-travellers.”