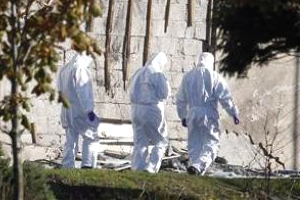 Martin McGuinness today condemned as “neanderthals” and “conflict junkies” the dissident Republicans responsible for last night’s car bomb in Derry. The deputy first minister was speaking alongside Northern Ireland secretary Owen Paterson during an historic appearance at a fringe event at the Conservative party conference in Birmingham to discuss the country’s economic prospects.

“These conflict junkies are attempting to drive a city living very much to the future, back to the past. People in this city are horrified that there are still these neanderthals within our society.”

“They have nothing to say about the future and so cling to a past that everyone else has left behind. The progress that has been made in Northern Ireland over the years has been hard-won. They will not destroy that.”

Late last night, police were given a warning an hour before the Vauxhall Corsa, registration IAZ 6015, exploded at just after midnight, injuring two police officers and damaging a number of properties on the Culmore Road. Particularly badly hit was the Ulster Bank on the road, with residents, including those in a nearby nursing home, having been evacuated following a telephone warning using a recognised code word.

The attack comes just two months after a 200lb bombs exploded outside a police station in the town. In July, Derry was awarded the accolade of the UK’s first capital of culture in 2013, while just last week, former US President Bill Clinton visited the town to provide his advice and suggestions on the future of the Northern Ireland economy. Many, however, believe the attack was timed to coincide with Mr McGuinness’s appearance in Birmingham.