The Liverpool case once more highlights the need for reform to the regulation of football club ownership in England, reports Liam Thompson. 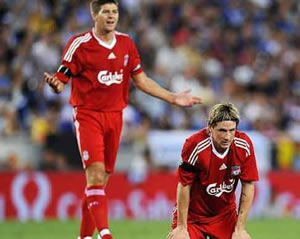 The case of Liverpool Football club, its ownership decided in a bizarre inter-continental court case, once more highlights the need for reform to the regulation of football club ownership in England. With Premier League debts at an all time high (more than the rest of European football combined), and ticket prices and wage bills rising exponentially, questions need to be asked about how to reform English football – into something that is healthier, sustainable and places fans at its core.

Campaigners told Left Foot Forward this week that the Liverpool case represents a complete failure of regulation, or lack thereof, and said that such a scenario would never be allowed to develop in countries such as Germany – where more rigorous regulation, with its emphasis on financial stability and transparency, exists.

Antonia Hagemann, Head of European Development at Supporters Direct, told Left Foot Forward that the takeover of Liverpool by New England Sports Ventures did not represent a significant step-forward.

“Generally, single ownership is one of the big problems in football across Europe. The Bundesliga is a good example of how it can be run differently as well as clubs such as Barcelona – which are member run clubs.”

The Bundesliga is often held up as an example of how football can be properly regulated – without big clubs being propped up by largely unaccountable, single owners, often based abroad. The German league has strict licensing conditions, which promote sensible financing and a 50+1 rule, which requires that 50 per cent plus one vote of a club and its limited companies must be owned by the members’ association.

In contrast to England, Ms Hangemann told us, Germany recognises the important social value of a football club, as a community asset, that means football clubs cannot be run like a conventional business.

“It’s a cultural thing, the philosophy of the Premier League is that they see themselves primarily as profit makers for their clubs and get the best they can for them. But clubs like Liverpool and Manchester United show huge risk.”

So, what affect has this “burden of regulation” had on the Bundesliga? The German league is one of only two leagues in Europe that actually makes money, along with the Swedish Super League. It is the most profitable league in the world, according to a Deloitte study, and its clubs, even big clubs such as Bayern Munich, are completely debt free.

There have been no bankruptcies in the Bundesliga for 40 years, it has recorded the highest stadium attendances in the world for the sixth consecutive year, and it has some of the lowest ticket prices – the average ticket price in the Bundesliga in 2008/2009 was €21 (£18), compared to €43 (£38) in the Premier League.

Director of Policy at the Football Supporters’ Federation, Steven Powell, said that despite the German model’s imperfections, it was “immeasurably better” than the Premier League.

“A court battle between two different continents, over one of the world’s great football clubs just simply wouldn’t happen in Germany. There were siren calls in Germany saying ‘look at England, look at the money they’re making’ – but the wiser heads have prevailed. The wiser heads said look at Portsmouth, Man Utd and Liverpool.”

In Germany, football fans resemble engaged citizens, having a much greater role compared to the Premier League where fans are regarded as consumers of a product. Recently, German fans took action over ticket price hikes in the Dortmund-Schalke derby – marching to protect “fankultur”.

Mr Powell said the FA had failed to regulate properly, and that it had been left to fans to search for alternative models of ownership:

“It’s a shame that it’s been left to the fans to explore alternatives – the Premier League and the Football Association are sitting there saying ‘it’s nothing to do with us governor’.

“Before the 1980s, with Rule 34, the FA recognised that the job of a football club was too put a football team on the park every Saturday for the community it serves, but they kind of ‘reversed into’ clubs being quoted on the stock exchange. But now even UEFA appreciates that members’ associations are the best model.”

A change in the culture at the boardroom was also detectable, Mr Powell argued, where previously directors got involved with their local clubs they did not regard it as a money making venture. Now English clubs are run like multi-national corporations – Christian Aid recently highlighted in a report into financial secrecy in football, which disclosed that 25 UK clubs are registered abroad in countries notorious for their opaque tax and business regulations.