A YouGov poll for the 2012 London mayoral election shows that Conservative Mayor Boris Johnson is ahead of his Labour Party opponent Ken Livingstone. 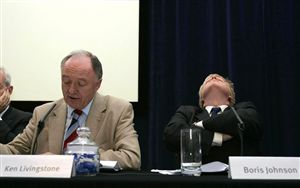 First polling for the 2012 London mayoral election has shown that Conservative Mayor Boris Johnson is marginally ahead of his Labour party opponent Ken Livingstone. The poll, carried out by YouGov, shows Johnson narrowly ahead on first preferences, by 46 per cent to 44 per cent.

Both candidates have positive job approval amongst those surveyed – 58 per cent of respondents believe Johnson is performing well as Mayor, and 56 per cent also said Livingstone did well in office.

Livingstone’s approval rating, though, has improved markedly since the first poll after Johnson’s election, where Livingstone’s share of the vote was only 33 per cent, a 16-point lead for Boris. A later poll that included Livingstone and Oona King showed a combined Labour vote of 36 per cent, with Johnson’s poll total falling.

Since the announcement of Livingstone as the Labour candidate, a ComRes poll showed the lead that Boris had previously enjoyed was shrinking further still – with Livingstone scoring 35 per cent to Boris’s 44 per cent.

However, Johnson had a negative approval for his handling of the London Underground (only 43 per cent approval) and Livingstone had higher ratings than his successor on “competence” and “being in touch with the concerns of ordinary Londoners”.

Despite overall disapproval on the Underground issue, 62 per cent agreed with the Mayor that strikes should be made more difficult – with a minimum turnout imposed on strike ballots – following one-day walkouts by London Underground staff in September and earlier this month.

Only 48 per cent of the 1,271 Londoners surveyed believe Tube workers should have the right to strike, and an astonishing 40 per cent think they should not be allowed to strike. In a national newspaper recently, one particularly sarcastic letter writer highlighted the absurdity of the Mayor’s position on this.

“I was intrigued to read Boris Johnson’s call for legislation to invalidate the results of ballots where less than half the eligible electorate exercise their right to participate. Presumably we can expect the resignation of the Mayor of London (elected on a turnout of 45.33 per cent) forthwith?”

One other issues Johnson scored well – 70 per cent believe the “Boris bikes” were a good idea, 54 per approval on London bus services, and a further 51 per cent think he is handling the 2012 Olympics well.