The commitment to ring fence UK aid and reach 0.7 per cent of GDP is welcome, and a testament to the hard work of many Labour MPs in the last Government. 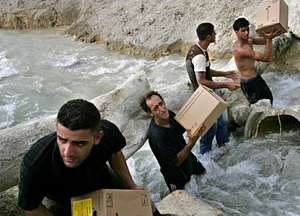 The commitment to ring fence UK aid and reach 0.7 per cent of GDP is welcome, and a testament to the hard work of many Labour MPs in the last Government and anti-poverty campaigners in making this a consensus issue in the eyes of the British public. However, as with the rest of the Comprehensive Spending Review, behind the rhetoric there are real concerns and real questions that need answering.

As Harriet Harman said in her statement yesterday, freezing spending in the Department for International Development (DfID) until the third year requires a huge leap of faith in the coalition. It is also contrary to what the Conservatives themselves pledged before the election.

When 57 per cent of Tory party members oppose the ringfencing – see this poll by Conservative Home today – it is vital that they bring forward the legislation they promised and enshrine in law the requirement to meet the 0.7 per cent target from 2013.

“The Bill is already drafted and we will give it full co-operation for its passage through Parliament. Failure to do so will only raise fears that they remain in doubt about whether they will actually keep their promise.”

We must be vigilant in ensuring that UK aid is not siphoned off for military purposes. NGOs such as Oxfam and Save the Children have become increasingly alarmed at the direction the coalition is taking in this regard, as reported in The Guardian yesterday.

The coalition has indicated that 30 per cent of overseas development aid (ODA) is to be spent in fragile and conflict-affected states (Strategic Defence and Security Review, page 44). Given that 40 per cent of ODA is currently spent on country programmes, this would mean 75% of country programme money going to conflict countries. Which countries are defined as ‘fragile and conflict affected’ is therefore important – currently DfID’s definition stretches to include a wide number of countries including Ethiopia, Kenya, and Nigeria.

However, if that definition is narrowed to only a small number of countries, such as Yemen, Pakistan, Somalia and Afghanistan, then this puts our obligations to people in some of the poorest countries at risk including the likes of Ghana, Malawi, Tanzania and Zambia.

When Left Foot Forward interviewed Andrew Mitchell on the leaked DfID cuts, he said that this new emphasis would not mean that money would be diverted from health and education programmes in non-conflict countries. He must be held to account on this.

Beyond aid: financing for development

As others have argued on this blog, there is an alternative way to fund overseas aid – and that’s a Robin Hood Tax on the banks. But Britain can take strong action on something which will not cost the UK taxpayer a penny – clamping down on tax evasion. According to Christian Aid, tax dodging by companies operating in developing countries would potentially give developing countries up to $160bn (£100bn) a year.

The coalition government should take strong action on this and have spoken warm words on this issue. It will be difficult, however, for the UK to be credible on this issue when Mr Mitchell and chancellor George Osborne have been accused of tax avoidance themselves – Channel 4’s Dispatches revealed on Monday that Mr Mitchell has invested at least £130,000 in offshore investment funds, one of which is based in the Caribbean tax haven of the British Virgin Islands.

• Will the definition of fragile and/or unstable states change?

• Will DfID guarantee that cash spent in these states will be spent according to best poverty reduction practice?

• To what extent will climate finance contributions be additional to ODA?

• What are the proportions that will be spent by each government department involved in climate change?

• How much flexibility remains in the budget for decisions to be made in the bilateral, multilateral and humanitarian aid reviews? (e.g. some IFI contributions are listed under ‘Capital’ expenditure limits.)

• Given the backloading, will some programmes be cut in the first two years in order to meet the rising contribution to fragile/conflict states?

• When will the legislation for the 0.7 per cent target be introduced?