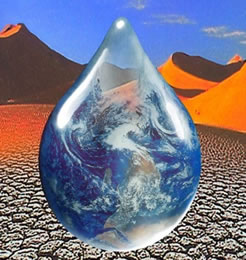 Every year, the social action website Change.org run a Blog Action Day. Last year, the focus was on climate change, with more than 13,500 people blogging on the issue including Gordon Brown and The Huffington Post. This year, the theme is water and sanitation.

Diarrhoea, for example, is now the biggest killer of children under five in Africa (source: World Health Organisation) and a massive burden to women and girls particularly as they spend valuable time walking for water and caring for sick relatives instead of going to school or working to support their children.

The previous Labour government were real champions of water and sanitation issues, with the department for international development being a major force behind the launch of the Sanitation and Water for All initiative (SWA) which is a global partnership between donor and developing countries and multilaterals as well as civil society bodies such as the End Water Poverty campaign. It aims to connect aid to developing country plans that will deliver sanitation and water for all.

The current coalition government has, to its credit, given water and sanitation greater profile within DfID, placing it alongside other basic services such as health and education. It is disappointing, therefore, that at the United Nations Human Rights Council just two weeks ago, our government dissociated itself from a resolution that recognised the right to access water and sanitation as a legally binding human right.

The resolution gives water and sanitation a standing equal to other social rights, as well as the legal impetus for states to incorporate the right to water & sanitation in national law – the UK now stands alone alongside only 12 other countries in not recognising this.

As Steve Cockburn, former campaign coordinator for End Water Poverty, points out over at Progress today, this matters because development is far more than signing cheques to build schools or medicines – it is about power, rights, accountability. He writes:

“South Africa’s Water Services Act, for example, enshrines their citizens right to a minimum provision of water, and has been instrumental in driving the government to expand and improve services to its people. Wells and latrines are no longer the in the realm of charity, but in the realm of justice.”

The Coalition should put this disappointing episode behind it by signing up to the resolution, and then get on with pushing up the profile of water and sanitation both inside DfID and also in wider development circles. They can do a great deal in championing the SWA to other countries and donors to make it fully fledged.

Also, as Rushanara Ali, Labour’s new shadow international development minister, stated in Wednesday’s International Development Questions, the coalition must not drop the vital commitments to help 25 million people to gain access to water and sanitation in Africa over the next five years and to help 30 million people in south Asia by 2011.

Lastly, DfID has also just announced bringing the private sector more into development processes in order to stimulate ‘wealth creation’. They should be mindful of the UN statistic that every $1 spent on sanitation and water brings a $9 return to developing country economies – powerful evidence to support government investment in ensuring water and sanitation for all.

Next year campaigners across the globe will join in a global action, The World Walks for Water, to further push the profile of water and sanitation up the agenda – in an initiative organised by End Water Poverty and partners. Let’s hope the UK government and others respond; you can take action by going to EndWaterPoverty.org.