Reaction on the web to Ed Miliband's speech is fairly positive with unsurprising support from tweeting delegates and approval by supporters of his brother. 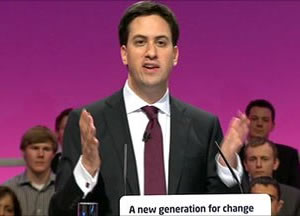 Reaction on the web has been fairly positive with unsurprising support from tweeting delegates, approval by supporters of David Miliband and criticism reserved to the Tory-supporting blogosphere.

Former Blair special adviser, Conor Ryan, blogged that it was a “clever and well-constructed” speech that “met the tests set for him by the tabloids”. But cautions that it “lacked a clear sense of where Ed Miliband will take the party.” David Miliband’s blogging supporter, Tom Harris MP, said he “genuinely thought it was an extremely accomplished performance” and was relieved it was delivered by autocue. Alistair Campbell writes “I for one totally back his line that a new generation is now in charge” and goes on:

“He dealt well with the sense, a lot of it media-driven, that he wants to take Labour wildly off to the left. He did a fair bit of distancing from some parts of the New Labour record, notably Iraq, immigration, and the failure to sort out the bankers before they wreaked havoc, but he also did a very good job of setting out the scale of change made under TB and GB and why the party should be proud of it.”

Sunder Katwala at Next Left refers to Ed as “Labour’s RFK” and discusses the “audacity of optimism” which he sees as a “challenge to the Cameron-Clegg ‘new politics’.” Hopi Sen says the “excellent speech” echoed “Kennedy, with a hint of Obama, by way of Macmillan” Economics blogger and Ed Balls supporter, Duncan Weldon, tweets, “EM – “halve the deficit over 4 years… we must remain vigilant against a downturn.” Is this 4 yr plan with escape hatch?” The Staggers’ George Eaton similarly identified a fudge and tweeted “Ed M wise to avoid risky prediction of a double-dip but deficit passage a messy hybrid of Balls and Darling”.

Leading Lib Dem blogger, Stephen Tall, writes on Lib Dem Voice that it was a “detoxifying” speech and sees it as “a conscious pitch for the liberal-left vote which the Lib Dems have sometimes successfully attracted, and which appears at risk in the new Coalition politics”. And Green MP Caroline Lucas critiques “If Ed’s new politics is adding dash of environmentalism to business as usual – as tiny bit on climate added at end of speech – it looks grim” but adds “Liked Ed’s words about pluralism though, & glad he’ll support AV.”

Times columnist Mary Ann Sieghart gives a cautious thumbs up tweeting “Unions: tick. Deficit: tick. Welfare reform: tick. Optimism? Not so sure.” Jackie Ashley of the Guardian who favoured his candidacy says he was “the right choice after all”. The BBC’s Nick Robinson focuses on the remarks about Iraq as a “break from the past“. The Indy has a similar theme remarking that “Ed Miliband exorcises New Labour ghosts”. Gary Gibbon of Channel 4 News says, “He didn’t sink, he didn’t fly. But given that most of the people in the hall didn’t vote for him and were gasping on Saturday as the results came up on the screen, he turned some opinion in the room.” Harry Mount at the Telegraph says he “came across well” but “can’t deliver a gag for toffee”.

The normally critical Iain Martin writes on the Wall Street Journal blog that it was “confident first leader’s speech from Mili E”. Real criticism is reserved to the Tory blogosphere. Iain Dale was less unimpressed suggesting that “Ed Miliband needs to make speeches in the style he is most comfortable in. And that is not behind a podium or reading from an autocue.” While Coffee House’s Peter Hoskin says, “the new Labour leader is stuck in stasis”. On Conservative Home, Tim Montgomerie said it was a speech that contained “many cliches“. Most baffling all, Con Caughlin of the Telegraph writes “Ed Miliband is not fit to be Prime Minister if he thinks Iraq was wrong”.

Tweetminster, meanwhile, reports that “the most mentioned parts of the speech were around: 1) support for AV and reform of the Lords 2) Ed Miliband’s stance on unions 3) civil liberties 4) the Iraq War 5) schools 6) the ‘good society’ 7) David Cameron 8) opening references to David Miliband 9) climate change 10) Red Ed and, of course, frequent mentions of term optimism and variations of ‘generation’ were widely present both on stage and in tweets”.

The only known reaction from the general public so far is from Sky’s Katie Stallard who conducted a focus group of non-Labour voters in Swindon. She tweets: “Ed mili gone down very well with swindon panel – asked to describe him in a word came up with ‘passionate’, ‘fair’, ‘warm’, ‘compassionate’.”

And our view? A very good start in difficult circumstances. He tackled the elephants in the room (the deficit, the unions) with an Obama-esque approach which avoided triangulation and, instead, found the middle ground.

His lengthy passage on the achievements of Labour’s time in Government may have bored the press but was essential for winning over those delegates concerned that he would distance himself from the good as well as the bad of new Labour.

The delivery was strongest at the very end when he came back to his message of “optimism” but he stumbled at times and held back from speaking over the applause of the audience – a rhetorical trick that Blair and Brown often used to generate a crescendo. But overall, an impressive first conference speech.

“A socialmention analysis of online comment suggests that the speech was well-received by the digerati, with three positive mentions of the speech to every one negative comment. Similarly, on Twitter, supportive statements about the speech outnumbered critical views by a factor of four to one. So it seems that the digital generation may be more like Ed’s generation than the party members here in Manchester.”