Here at Left Foot Forward, we have taken David Miliband’s green proposals and compared them to statements from the Coalition and also from the other Labour front runner, his brother Ed. 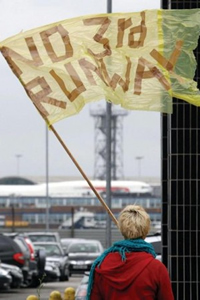 At the weekend, The Independent on Sunday reported that Labour leadership contender, David Miliband “said the coalition’s refusal to impose a moratorium on deep-sea drilling in the wake of the Gulf of Mexico disaster exposed its commitment to the environment as ‘nothing but spin'”; last month Left Foot Forward reported how the UK has refused to heed calls from Europe to follow President Obama’s lead in introducing a moratorium on the riskiest drilling until the reviews into BP’s accident in the Gulf of Mexico have concluded.

This week, the Guardian reports on how both Milibands are jostling for the ‘green vote’ after David Miliband outlined where he thinks the Coalition is failing right across climate and energy policy and launched his ‘4-point plan’ for greening the UK economy.

Here at Left Foot Forward, we have taken David Miliband’s green proposals and compared them to statements from the Coalition and also from the other Labour front runner, his brother Ed.

1. Protect key public funding to support the transition to a low carbon economy – especially for the Green Investment Bank, port redevelopment and the electric car fund

The Coalition has shelved the Green Investment Bank capitalisation plan announced by Labour, and they have yet to announce if the money to upgrade ports to accommodate for offshore wind will survive the so-called ‘star chamber’ which has already puts in to doubt the plans by Siemens for a new wind turbine factory in Britain. Ministers have cut the electric car fund by 80 per cent.

Like David, Ed Miliband has attacked possible cuts to investment in clean heating and electricity and vowed to invest in green industries.

2. Implement the Emissions Performance Standard for new power stations and rapidly give the go ahead to the four planned CCS demonstration projects

The Coalition Agreement promises the “establishment of an emissions performance standard that will prevent coal-fired power stations being built unless they are equipped with sufficient CCS to meet the emissions performance standard”. As well as being vague, the Guardian recently reported that the coalition has shelved this flagship green policy as new standards won’t be part of this year’s new energy legislation.

Whilst the coalition agreement promises “continuation of the present Government’s proposals for public sector investment in CCS technology for four coal-fired power stations”, the last government’s funding for CCS has been put into the CSR and is being threatened with the axe.

When he was energy secretary, Ed Miliband opposed the introduction of emissions performance standards for power stations, but the four CCS demos were his idea and he fought the Treasury to get the CCS levy to raise the funds for them.

3. Commit to the core recommendations of Lord Turner’s Committee on Climate Change: to decarbonise the power sector of the UK by 2030; to ensure 1.7m electric cars on British roads by 2020; and to ensure no coal fired power stations in the UK are still producing large amounts of carbon pollution by 2025.

The Coalition have not endorsed and adopted the recommendations of the Committee on Climate Change. But the coalition agreement does state: “We are agreed that we would seek to increase the target for energy from renewable sources, subject to the advice of the Climate Change Committee.” So far, there’s no indication they’re planning to raise their renewables target, which they will already struggle to meet given their cuts to clean energy budgets.

In an interview with Left Foot Forward on Monday, Ed Miliband said he would aim for “around 40 per cent of our electricity coming from low carbon sources by 2020, en route to an almost complete decarbonisation in the 2030s”. This isn’t quite as far as David who said “yes” to near decarbonisation of electricity by 2030.

Whilst Ed has expressed support for electric cars and criticised coalition cuts to the budgets supporting them, he hasn’t – to Left Foot Forward’s knowledge – endorsed the target of the Committee on Climate Change.

4. Signal a moratorium on new deep sea oil drilling until its own review of safety has been carried out

The Coalition has ruled out introducing a moratorium on deep sea oil drilling and now faces the prospect of legal action by Greenpeace who believe continued licensing for offshore oil drilling would be illegal without a new environmental assessment that considers lessons from the Gulf blow out.

Ed Miliband has described the need to build a post-oil economy in an article for the Guardian, but he has not gone so far as to call, like David, for a moratorium on offshore deep sea drilling.

Undermining all of David Miliband’s statements on the need to clean up the power sector is his apparent continued support for the expansion of Heathrow airport. According to VoteMatch – where Labour leadership contestants answered questions on a number of issues – he still supports the expansion of Heathrow airport. In contrast, Ed Miliband – who is known to have voiced his opposition to the third runway in cabinet – has said he would oppose the extension.

Today’s Standard has a report headlined “David Miliband: We need third runway at Heathrow”, which says that David:

… believes that it could boost London’s economy and businesses, sources close to him insisted, and it should go ahead as long as the climate change consequences are addressed.

His leadership rival and brother Ed opposes the runway.

“At last a politician prepared to publicly acknowledge the vital importance of international transport links to London and UK’s economic success, though the critical question is not whether to make Heathrow bigger but how to make it better.”

“The third runway, like the Iraq war, is one of the iconic failed policies of Labour’s 13 years in power – a good solid example of where they lost the argument and lost peoples’ trust.

“David Miliband’s decision to offer his continued support to Heathrow expansion makes no sense politically, economically and environmentally, and will no doubt damage his support amongst Londoners.”

23 Responses to “The Milibrothers take the green test”