Vince Cable received praise from certain quarters today for his speech attacking capitalism - yet his record tells a different story to his rhetoric. 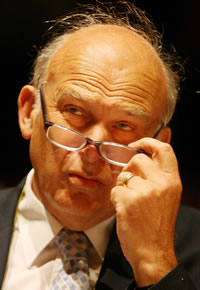 Vince Cable certainly wasn’t put off by his critics in the right wing press about attacking the financial sector at he Liberal Democrat conference today. He stuck it to them, and he deserves kudos for having done so (see our post on Left Foot Forward earlier today).

But there is a huge chasm between what Dr Cable says, and what he actually does. For example, back in July he published a Green Paper boldly titled ‘Financing a private sector recovery’ – it promised much but delivered little. Today he repeated the trick.

On banks his line was:

“Make them safe and make them lend.”

He then went on to attack:

“… spivs and gamblers who did more harm to the British economy than Bob Crow could achieve in his wildest Trotskyite fantasies, while paying themselves outrageous bonuses underwritten by the taxpayer … there is much public anger about banks and it is well deserved.”

But his July green paper offered praise to banks for having improved their capital positions. The only sop to small businesses was a statement of the blindingly obvious that “businesses need finances for both working capital and investment purposes”.

Today, he again rightly stressed “the threat to recovery from a credit squeeze by banks on small businesses”.

Yet his speech contained no proposals to do either of these things. Bank lending to business continues to fall, not because of falling demand by businesses but because the banks have shut up shop. Meanwhile, banks continue to pay exorbitant bonuses. In June, the Bank of England’s (BoE) financial stability report stated that if major banks kept to 2008 bonus levels, they would generate an additional £10bn in capital that could sustain £50 billion of lending.

Yet Dr Cable had the nerve to say today that:

“The Chancellor and I have set out a range of sticks and carrots to get banks to support the real economy. Tough interventions will be needed if capital which could be used to support business lending is frittered away in bonuses and dividends.”

Nonsense. The green paper offered no tax incentives for banks to lend nor did it propose any increases to the funding and size of the enterprise finance guarantee or government loan guarantee schemes. It only focused on banks rebuilding their capital bases, which they have already done thanks to the monetary easing policy taken by the Bank of England.

He seemed, however, to acknowledge this when he said that “many firms say they are already being crippled by banks’ charges and restrictions”.

So while his speech sounded good, when examining the policies his department and the Treasury have taken so far – a small banking levy, a tiny increase in capital gains tax that the Budget book estimates will be worth £0.8bn per year, nothing to stimulate growth or demand – his rhetoric is desperately hollow.

His final remarks on the economy are the most revealing about the contradictions of Vince Cable the populist and Vince Cable the business secretary in a Tory-led coalition:

“Economic recovery will not happen automatically, by magic. Government has a key role. It has to sustain demand. That is basic Keynes.”

The sad truth is that Dr Cable preaches Keynes but backs coalition economic policies that, with a massive fiscal consolidation when the economy is still weak, would make the great man turn in his grave.

11 Responses to “The contradictions of Vince Cable”