The Murdoch press has wasted no time peddling inaccuracies and half truths about Ed Miliband; other members of the right-wing press have been more responsible. 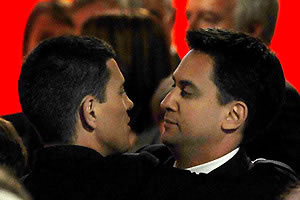 The Murdoch press has wasted no time peddling inaccuracies and half truths about Labour’s new leader. Other members of the right-wing press have been more responsible with stories about Ed Miliband’s broader appeal.

“Ed Miliband is ready to give his older brother any job he wants to keep him at the front line after the support of union leaders gave him a wafer-thin victory in the Labour leadership contest.”

The truth, of course, is that individual votes from trade union members – such as teachers, nurses and carers – and members of affiliated organisations including the Fabian Society, Labour Students, Black Asian Minority Ethnic Labour and the Christian Socialist Movement gave Ed Miliband a clear victory in the affiliates section.

Although he narrowly lost the Labour Party membership and MPs/MEPs section of the electoral college, when all votes were counted together, he received 175, 519 votes to 147,220. Block votes distributed by “union barons” were abolished by John Smith in 1993.

The Sunday Times went on to claim:

“During his campaign the new leader called for higher taxes on higher earners, possibly by reducing the threshold for paying the 50p top tax rate, from earnings above £150,000 to earnings over £100,000.”

The claim is a straight falsehood. While Ed Balls did make this suggestion, Ed Miliband said only that the tax should be made “permanent“. David Miliband said that the 50p rate “should certainly stay this Parliament”.

The paper went on to refer to an article penned by Ed Miliband in the Sunday Telegraph which it calls “a clumsy attempt to quash fears he will abandon middle income voters”. The article explained that:

“My aim is to show that our party is on the side of the squeezed middle in our country and everyone who has worked hard and wants to get on. My aim is to return our party to power. This is a tough challenge. It is a long journey. But our party has made the first step in electing a leader from a new generation.”

The “squeezed middle” is a term that has been used recently by John Healey MP, a supporter of Ed Balls, to describe voters earning between £20,000 and £30,000. His memo to the new leader set out the five policies areas that needed addressing as housing, skills, the workplace, childcare and savings support.

But the term was also used by David Miliband supporter Liam Byrne in a speech in May to the Demos think tank where he called for a ‘middle-class task force’ which would look at jobs, taxes and benefits, the minimum wage, welfare reform, skills, higher education, child care, social care, social housing, and pensions.

The Sunday Times article also said “his message was confused by a second article that he penned for The Sunday Mirror in which he emphasised Labour’s identity as the party of the working classes”. The Sunday Mirror article, in which Ed Miliband outlines his ‘vision for Britain’, says:

“It is a great privilege to have been elected leader of the Labour Party… At its best, Labour is the party of the working people of Britain and I am proud to lead it.”

“The Labour Party should be the party of the hardworking majority in this country. We should be the party that stands up for you when you want better education for your children, a fairer deal in our economy or action on crime in your neighbourhood. We were that party once and, under my leadership, we will be again.”

During the campaign Ed Miliband outlined in an article for The Guardian that Labour had to win back both middle earners and working class voters, so addressing both sets of voters in respective articles for The Sunday Telegraph and the Sunday Mirror is entirely consistent with this approach.