Children’s minister Tim Loughton has called for a “school sports revolution” - yet the coalition is planning to cut £670 million from the schools budget. 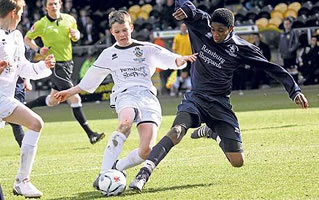 The cuts to the education budget – £670 million – and the abolition of the Building Schools for the Future programme in particular, have the potential, however, to check Mr Loughton’s laudable aims, as do the £61 million of cuts to the Dept. for Culture, Media and Sport (DCMS).

As Left Foot Forward reported in May, 3 per cent savings will have to be made from across the board, from public bodies and DCMS’s core budget; we reported that:

An example of what this may mean on the ground can be seen in the cuts that may have to be made to Sport Unlimited, a £36 million programme established in 2009 with the aim of attracting 900,000 extra young people into sport by 2011; a 3% cut could result in 27,000 fewer young people taking up sport, to the detriment of the nation’s sporting success and health and wellbeing.

While the impact of the coalition’s cuts on school sport will not be known for some time, it is worth reflecting on the record of the previous government in this field. The Department for Education’s “PE and Sport Survey 2009/10” reveals that, since 2003/04, the proportion of schools offering the following sports has risen markedly:

It concludes by saying:

There is, however, still scope for improvement on this measure (participation in two hours of PE and out of hours school sport was first measured in 2003/04 at 62% and rose over a five year period to 90% in 2007/08) and it will be important to continue to monitor it in the future.

Again, whether the improvement is realised, especially with the eyes of the world upon us with the Olympic Games coming to town in 2012, it is too soon to say. In terms of quality and quantity of sports teaching and coaching both in schools and in communities, the full impact of the government’s cuts across the board won’t be known till subsequent surveys are carried out.

The signs, however, are ominous. As the Standard reported in May:

London’s schools face losing hundreds of millions of pounds earmarked for new classrooms, sports halls and canteens under government funding cuts… There are fears that boroughs such as Sutton, which was one of the last councils to enter the programme, could be among the first to be hit by cuts.

Vivien Jones, head of Carshalton High School for Girls, said: “It would be a disaster for us if the funding were to be lost at this stage. At the moment we have a lot of mobile classrooms and we are short of sports facilities, which means we can’t deliver a full PE curriculum. We have to use the local sports centre.”