Former London Mayor Ken Livingstone has described Islamist extremist Yusuf al-Qaradawi as “one of the leading progressive voices in the Muslim world”. 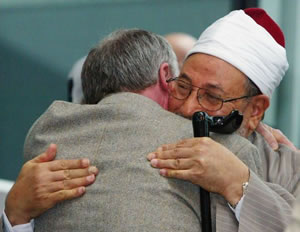 Should a man who supports wife-beating, FGM, and either lashing or killing homosexuals, really be considered a “progressive”?

In an interview with Ahmed Versi of The Muslim News, Labour Mayoral candidate and former London mayor, Ken Livingstone, appeared to suggest that he should.

AJV: “During your tenor [sic], you were criticised for your support for Sheikh Qaradawi. Are you going to change your policy?”

KL: “I think the fact that Sheikh Qaradawi has been banned is a disgrace; he is one of the leading progressive voices in the Muslim world. If you look at Sunnis, there are two strands. You have the Wahhabis supported by the Saudis and there are much more tolerant people like Qaradawi…

“When I met this man, [I found him that] he’s a progressive, humble person who is looking at how Islam can engage with the rest of the world and we should support him.”

Yusuf al-Qaradawi is often described as the ‘spiritual leader’ of the Muslim Brotherhood, the world’s largest Islamist organisation. In 2004 he turned down an offer to lead the Egyptian Muslim Brotherhood and has instead pursued a career in televangelism and as an advisor on Islamic banking. As the interviewer mentions, al-Qaradawi is also banned from entering the UK (and, since 1999, the USA).

Among al-Qaradawi’s many publications is a book which seeks to give guidance to Muslims living today about how they should live their lives. It is called ‘The Lawful and Prohibited in Islam’ (pdf). On page 76 he refers to homosexuality as a “perverted act” and “depraved practice”. He then discusses potential punishments for homosexuals:

“The jurists of Islam have held differing opinions concerning the punishment for this abominable practice. Should it be the same as the punishment for fornication [i.e. lashing], or should both the active and passive participants be put to death? While such punishments may seem cruel, they have been suggested to maintain the purity of the Islamic society and to keep it clean of perverted elements.”

On page 90, al-Qaradawi goes on to state that, if a husband “senses that feelings of disobedience and rebelliousness are rising against him in his wife” and he cannot address these through reasoning with her or sleeping apart from her, then “it is permissible for him to beat her lightly with his hands”.

Al-Qaradawi has also issued a fatwa (religious opinion) arguing that “circumcision is better for a woman’s health and it enhances her conjugal relation with her husband” and that, while it is “not obligatory”, “whoever finds it serving the interest of his daughters should do it, and I personally support this under the current circumstances in the modern world”.

Are such views really “progressive”?

Mr Livingstone presents his audience with a false dichotomy. The alternative to Saudi-style fringe figures who demand that the world is flat and that women must not drive cars, work with men, or reveal their faces in public, is not necessarily al-Qaradawi.

What about other Muslims around the world who, although they may still consider homosexuality to be a sin, do not want homosexuals to be punished in this world? And those who oppose FGM and wife-beating? Are they not the real “progressives”?

The danger is that, if leading figures like Ken Livingstone continue to claim that Yusuf al-Qaradawi is a ‘moderate’, they will feed the EDL/BNP narrative that there is no such thing as a moderate Muslim. For many British people, particularly those living outside the larger cities, their only knowledge of Muslims and Islam comes from the media. If they see a Muslim figure who supports FGM, punishing homosexuality and wife-beating being lauded as a “progressive”, then some may well ask ‘How regressive are the views of other Muslims?’.

Whatever one thinks of the previous Labour government’s decision to ban al-Qaradawi from the country, there are clearly reasons to be concerned about his views. Against a background of increasing anti-Muslim bigotry in this country, Ken Livingstone may think that his defence of al-Qaradawi is a defence of all Muslims. In reality, he runs the risk of making the situation worse.

46 Responses to “Livingstone: Al-Qaradawi is a “leading progressive voice” in Muslim world”