Only 29 per cent of Liberal Democrat voters support the scale of the government's spending cuts, according to a poll in this morning's Times. 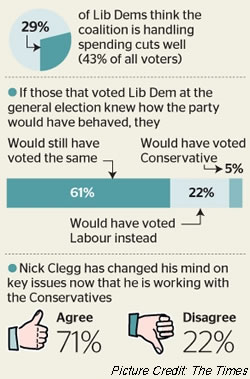 Only 29 per cent of Liberal Democrat voters support the scale of the government’s spending cuts, with more than 50 per cent of all voters believing Lib Dem leader Nick Clegg is more interested in the trappings of power than doing what’s best for Britain and 71 per cent saying the deputy prime minister has changed his mind on key issues since walking into Downing Street, according to a Times/Populus poll (pdf) out today.

It is the second poll this week showing the deep unease of Lib Dem voters at the cuts; the weekend’s Sunday Times/YouGov poll showed only 44 per cent of Lib Dem voters (and only 53 per cent of Conservative voters) believed the government had struck the right balance between spending cuts and tax rises.

Today’s poll coincides with a new report (pdf) by the Institute for Government looking into Coalition Government in the UK, which finds:

Polling evidence shows that both Liberal Democrat and Conservative voters initially viewed the coalition agreement in a positive light, but that Liberal Democrat supporters have grown more negative over the course of the first few months in power, even while the party’s number of supporters has fallen. This may reflect a higher profile achieved in the first three months of coalition by Conservative themes such as NHS and schools reform, and welfare cuts.

If such polling trends continue, the stability of the coalition may depend upon further concessions to the Liberal Democrats being made, particularly if the referendum on electoral reform were lost. For its part, the Liberal Democrats must be prepared to continue to stand by the commitments given to the Conservatives on fiscal policy, even as these become unpopular in Liberal Democrat ranks.

Also in today’s Times, Mr Clegg has written a column saying the poor must accept cuts in benefits, that the State must not “compensate the poor for their predicament” – yet, as Sunder Katwala points out:

…Clegg seems confused and contradictory in his short piece, first complaining about high marginal tax rates as benefits are lost – “Labour presided over a shambolic tax credit system that left too many people receiving paltry rewards for making the brave leap into work. More than half a million people face an effective tax rate of more than 90 pence in the pound, as benefits are withdrawn and tax kicks in”.

That attack on a “paltry” system must mean Clegg thinks it gave those in work too little. Yet the same article attacks Labour for putting more money into redistribution, arguing that it entrenches dependency…

Clegg would seem to be for more and less redistribution at the same time.