Ahead of a crucial United Nations summit on Millennium Development Goals, Nick Clegg has a conundrum: will he represent the policies of the Coalition or his own Party? 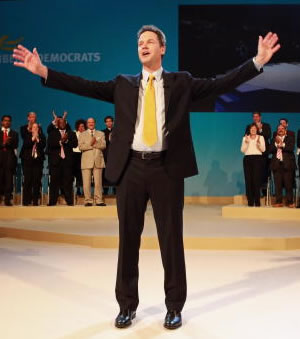 Just days before a critical United Nations summit on the MDGs at which Nick Clegg will represent the UK, policy proposals released ahead of the Liberal Democrat’s conference reveal serious criticism of the Coalition’s development policies. Ahead of the UN Summit, the deputy prime minister has a conundrum: will he represent the policies of the Coalition or his own Party?

The document, entitled ‘Accountability to the poor: policies on international development’, highlights disagreement between the Lib Dems and Tory ministers on development, picking up on many of the concerns raised by Left Foot Forward, including: the use of aid for national security purposes, climate change, aid effectiveness, and proposals for an online vote on aid spending.

Adding to the criticism of the risks of aid securitisation by charities last week, as reported in The Guardian, the document warned that “there is a danger that a MOD-dominated Stabilisation Unit will use ODA [aid] to prioritise security agendas.” [p.43]

The document reiterates their manifesto pledge that aid for climate mitigation, conflict prevention and debt reduction should be additional to the 0.7% of national income for aid – yet as we’ve previously reported there is nothing in the Coalition agreement on climate finance.

It is also at odds with the Coalition’s pledge to widen the definition of what counts as aid, stating that:

“Liberal Democrats do not recognise as development…scholarships for students from developing countries…to provision of peacekeeping forces.” [p.27]

The Tories’ ‘My Aid’ programme, panned by NGO experts before the election, is also in the line of fire:

“A My Aid programme runs the risk of over simplifying issues and switching development spending towards measurable but meaningless projects.” [p.19/20]

Yet despite this criticism the document contradicts itself, praising the Coalition agreement despite these clear objections:

“We welcome and reconfirm our commitment to the policy set out in the Coalition agreement.” [p.3]

So, Liberal Democrats, what is it to be? With so much of the Party’s development policy, both in their manifesto and in this document, at odds with the Coalition agreement, what will Nick Clegg have to say when he attends the UN Summit next week?

Labour seized on the documents, with Shadow International Development Secretary Douglas Alexander saying that they showed an ‘aching gap’ between Nick Clegg and the views of ordinary Lib Dem members.

He criticised Clegg for being a front-man for the Tories and again criticised the Coalition for lacking leadership ahead of the Summit:

“Steps to tackle the scandal of maternal and child mortality are welcome – but Nick Clegg’s announcement this week ahead of the UN summit appears little more than a re-packaging of commitments Labour had already made last year to save the lives of 6 million mothers and babies by 2015.”