Kevin Meagher does some digging and ponders whether Nick Clegg could be about to conjure up £80 million to save Sheffield Forgemasters. 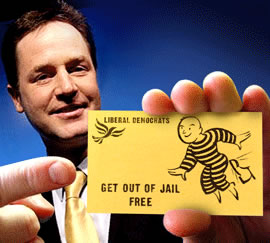 Some political issues become utterly totemic. The Poll Tax back in 1990. The miserly 75p pension increase in 2000. The scrapping of the 10p tax rate in 2007. These became proxies for broader antagonisms, lodging in the electorate’s psyche as a catch-all criticism of the government of the day.

The coalition’s decision to scrap the £80 million loan guarantee to Sheffield Forgemasters is another example. Back in March, Labour committed to a loans package that would enable the award-winning company to finance a 15,000 tonne press so it could get into the business of making large-scale components for the nuclear industry.

Already a successful, cutting-edge manufacturer, the loan was seen as an archetype of the kind of project that should benefit from an enlightened 21 century industrial policy. As shadow business secretary, Pat McFadden, put it:

“The Sheffield Forgemasters proposal was never just about aid to one company.  It was about the UK having an ambition to be a success in the growing world supply chain in civil nuclear power.”

But the deal was scrapped “on the grounds of affordability” during the coalition’s initial £6 billion worth of cuts this year.

Unfortunately for Nick Clegg, however, the company is in his Sheffield backyard and he has been badly wounded by the fallout. Like chewing gum on the sole of his shoe, this issue has proved remarkable adhesive to the deputy prime minister’s reputation. It is thrown in his face in order to sum-up the coalition’s general economic myopia. As he found out recently when 300 protestors in Sheffield jeered “Tory Boy Nick Clegg!” at him on his way into a conference on the future of the city.

So Mr Clegg’s recent response to Labour’s Kevin Brennan at Prime Minister’s Questions on 8th September about the coalition’s decision to rescind the loan guarantee was instructive. He said:

“The reasons, regrettably, why…it has not been able to proceed from this year’s budget is that it is not affordable under this year’s budget, given that the structural deficit is so much greater than we thought. In other words, it was a promise made where the money wasn’t available. It was a cheque written that the previous government knew would bounce.

“But we have made it very clear to Forgemasters that we will continue to work with them to see how we can support them in the future, once the budget situation becomes clearer after the Comprehensive Spending round.”

The deputy prime minister has been found guilty of clumsy circumlocutions in the past, but he seems clear that although help will not be forthcoming in this financial year, future help was a distinct possibility. The same message came from business secretary Vince Cable, in a written ministerial statement, where he confirmed the government would be willing to look at the project again “when the future availability of public funds becomes clearer after the completion of the spending review”.

So could there be a face-saving deal in the offing ahead of next month’s Comprehensive Spending Review? Finding the relatively small sum of £80 million down the back of a Whitehall sofa would get the Lib Dem leader out of a very tight spot. He could even go the whole hog and make a virtue of offering up a fulsome mea culpa for allowing a bad decision to slip past him in the first place.

Sheffield Forgemasters’ spokesman confirms there is a “continuing dialogue” between the company and BIS and it “will now look to review its 15,000 tonne press project in early 2011, acknowledging the latest offer of support from the Government”.

Meanwhile, Lib Dem-controlled Sheffield City Council is investigating whether a bid to the new Regional Growth Fund could be a possible back-door solution. But as the RGF is a one billion pound pot for the whole of England, finding £80 million for Forgemasters would eat up 8 per cent of the total funding for the entire country.

But if Lib Dem education minister Sarah Teather can get schools in her constituency exempted from the scrapping of the Building Schools for the Future programme, and if Highland Lib Dem seats can be exempted from the proposed gerrymandering of the parliamentary boundaries, then the question boils down to whether Mr Clegg has enough clout to save himself by dragging the pork barrel up the M1 to reverse the disgraceful decision about Sheffield Forgemasters.

9 Responses to “Forgemasters: Is Clegg about to play his get out of jail free card?”