Former Liberal Democrat MP Evan Harris has said his party and Labour need to be in a postion to form a progressive coalition after the next election. 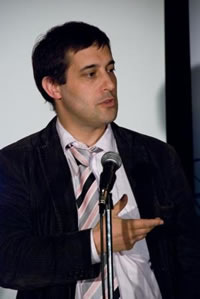 Former Liberal Democrat MP Evan Harris has said his party and Labour need to be in a postion to form a progressive coalition after the next election. The ex-MP for Oxford West and Abingdon – who reaffirmed his position as one of the leading Lib Dem progressives last week with an attack on Nick Clegg over the fairness of the budget – was speaking at a Compass fringe event on the “progressive alliance” at the Labour party conference yesterday.

Dr Harris said that “in terms of culture and policy” the Liberal Democrats were much closer to Labour, and that “if the arithmetic is there” his party should look to form a coalition with Labour, provided “we have the numbers and policy overlap”.

He also said there was “no chance” of an electoral pact with the Conservatives and described the recent Chris Huhne/Baroness Warsi double act (in which the Conservative party chair and the Lib Dem climate secretary launched a joint attack on Labour over public finances) as a “big mistake”, adding “anything with Warsi is a mistake”.

On the alternative vote referendum, he praised Ed Miliband for saying he would vote yes and said Labour “has nothing to fear” from AV. He said: “It should be easy to avoid a Conservative-led government as there will be more progressive votes” – as there were at the last election and at every general election since 1945, a point illustrated by Left Foot Forward last year. Dr Harris was also encouraged by the new Labour leader’s remarks on no id cards and the “rapprochement on civil liberties“.

He finished with a warning to Labour to cease the shrill attacks and shouts of “betrayal” against the Lib Dems – which were noticably absent in Mr Miliband’s leader’s speech on Tuesday – explaining how it would be counter-productive to describe the coalition as a “Tory government”, as “this would only seek to enhance the conservatives’ progressive credentials and allow them to take credit for all our policy gains, like on environmental policy, the Human Rights Act, on capital gains tax and tax cuts for the least well off in work”.

26 Responses to “Evan Harris: Progressive coalition in 2015 “if the arithmetic is there””