With forthcoming cuts to research and possible restrictions on the entry of foreign students today’s world university Rankings are very timely. 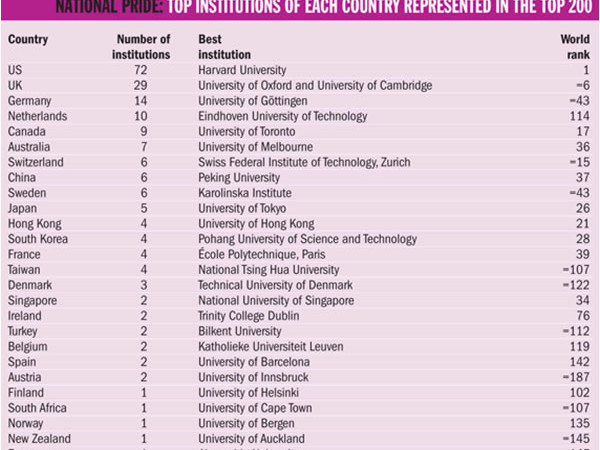 With forthcoming cuts to research and possible restrictions on the entry of foreign students today’s Times Higher Educational Supplement (THES): World University Rankings are very timely. The overall picture is clear – the US is the world’s pre-eminent university superpower bestriding the top five places and occupying 72 of the top 200.

Then, in a possible surprise to our self-image, the UK is the clear scholastic runner-up holding three of the top 10 positions (Cambridge, Oxford and Imperial) followed by a smattering of ‘mediocre’ institutions claiming 29 of the top 200. Whilst Germany and Japan are industrial behemoths – the UK reins top place in European academic institutions and research.

The wider question is whether our intellectual position matters in the world economy? My fridge is still German and my television from Japan. Well, setting aside the lofty ambition of creating Plato’s Republic here in the UK, there are sound economic benefits from the UKs academic strength.

To begin with, there are the huge fees that are collected from foreign students. Universities themselves gather about £2 billion a year in fees from non-EU students – slightly more than they get from government research grants. Foreign students, who are all self-supporting bring billions more into the economy as a whole.

International comparisons such as the THES World University Rankings will impact strongly on the number of students applying from abroad. Institutions such as my own, University College London, may be gnashing their teeth this morning at having dropped from an unlikely 4th in 2009 to a still respectable 22nd in 2010. This merely reflects widespread changes to the way the rankings are calculated rather than longer tea-breaks for everyone.

Second are the jobs supported by the higher education sector, which were calculated by Universities UK to be about one per cent of the UK workforce directly and about two and a half  per cent through knock-on multipliers – suppliers, construction, sandwich shops – which is incidentally the same amount what the government spends on higher education.

There are also the knock-on effects of having a highly skilled workforce and ideas that may ‘spillover’ into high tech start-ups or new patents. This is difficult to quantify. One can point to areas such as ‘Silicon Fen’, the concentration of high-tech businesses that surround Cambridge University with venture capital investments of billions and market capitalisations of tens of billions.

Countries such as China, Japan, Germany and France have much stronger high-tech sectors than the UK despite their lesser academic rankings. Much of the UKs academic excellence can of course ‘spillover’ to these countries too.

There are, of course, also the non-economic benefits that arise from having outstanding universities. Research has made our lives richer and the world better. This academic overachievement is despite the UK spending less than the OECD average on higher education, and less than half that of the US. Regarding the looming cuts Bahram Bekhradnia, director of the Higher Education Policy Institute makes a pointed rebuke to earlier comments by Vince Cable: