Billy Bragg, in an exclusive article for Left Foot Forward, argues that the new Labour leader Mr Miliband must be brave and bold on the AV referendum next year. 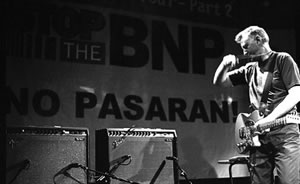 Tonight at 5:45, Billy Bragg will be speaking at a purple rally hosted by Take Back Parliament and many other groups campaigning for a ‘Yes’ in the AV referendum next year; here he outlines why Mr Miliband must be brave and bold on voting reform

As well as opposing the Coalition’s disastrous course of spending cuts, the new Labour leader will face the task of repairing our democracy in the face of the public’s deep-seated distrust for politicians. Key to this will be what position he takes in the referendum on the Alternative Vote next May.

Mr Miliband has to go for it – that’s the very clear message that myself, and many others, will be sending at a rally in Manchester Town Square today organised by the Take Back Parliament campaign.

Some have argued that electoral reform is a “distraction” that we can’t afford at a time of economic weakness. But that view is dangerously mistaken. Democracy isn’t an optional “luxury” that can be discarded when it suits us, it’s something that has to be continually fought for and defended.

From the Chartists to the Suffragettes, the history of electoral reform in this country is one of taking power from the few to give to the many. This is as true today as it ever was. The left’s fight for a more just and equal society is inseparable from the fight for fairness in our democracy.

Although the Alternative Vote isn’t the proportional system I had hoped for, it will deliver a fairer, more representative politics. For millions of people it would finally see the injustice of casting a worthless vote righted. My constituency of West Dorset, for example, is one of around 80 per cent of constituencies classed as a ‘safe seat’. With Labour languishing on around 10 per cent, a vote for the Lib Dems was the only option for those who wanted to keep the Tories out.

Since the formation of the Tory-Lib Dem Coalition, of course, this has all changed. If the next election is fought under first past the post, anti-Tory voters are left with a Labour candidate who stands little hope of getting in.

Until the voting system is reformed this frustrating state of affairs will continue and the natural anti-Tory majority in this country will remain disenfranchised. This includes the four million voters who deserted Labour between 1997 and 2010 without switching allegiance to the Tories.

A vigorous campaign by the new Labour leader for a “Yes” vote to AV will be the first step to winning them back. Standing on the sidelines or joining the Tories in supporting a “No” campaign headed by ideologues of the ultra right-wing Taxpayers’ Alliance would be unthinkable for a progressive reforming party.

Today in Manchester, Labour reformers will take the lead in agitating for a Yes. I will be there alongside Neal Lawson, chair of Compass, Billy Hayes, of the CWU, Fiona McTaggert MP and many, many others.

Together we will turn the Square purple – the colour of democracy and the franchise – with banners and flags and call on Labour’s new leader to back fairer votes. Join us at 5:45pm tonight to rally for democracy – and let’s send the next Labour leader a message they can’t ignore.

24 Responses to “Billy Bragg: Mr Miliband must be brave and bold on voting reform”