Ed Balls took time out from holding Michael Gove to account at the weekend to turn his ammo on Gove's deputy Sarah Teather, who has thus far escaped censure for the schools cuts - and who it now emerges lobbied her boss to give preferential treatment to schools in her Brent Central constituency and spare them the Building Schools for the Future axe. 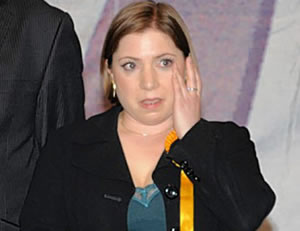 Ed Balls took time out from holding Michael Gove to account at the weekend to turn his ammo on Gove’s deputy Sarah Teather, who has thus far escaped censure for the schools cuts – and who it now emerges lobbied her boss to give preferential treatment to schools in her Brent Central constituency and spare them the Building Schools for the Future axe.

Following the Sunday Times’s revelations yesterday that Teather had secretly met Gove to discuss the fate of two Academy building projects in her constituency – shortly before an announcement was made to give them a reprieve – Balls said:

“… it is brazen hypocrisy of Sarah Teather to expect her colleagues to face public anger about cuts to their local school building programmes, while using her position as Michael Gove’s deputy to try to protect herself in her own constituency. She seems happy to go along with the cancellation of over 700 schools in other constituencies, but only as long as hers are protected.

“Very few MPs whose constituencies have been affected were granted meetings with Michael Gove and people will understandably ask why Sarah Teather and the Conservative MP who threatened to march on Downing Street saw a number of their local schools reprieved while Labour MPs in Sandwell, one of the hardest-hit areas, were sent away from their meeting with nothing.

“Michael Gove must explain how he decided which projects would go ahead, publish all the relevant documents and explain to Parliament what criteria, if any, were used.”

In March, Teather was cleared by the Parliamentary Standards Commissioner over expense abuses on a technicality after serious questions were raised over the rental agreement Teather and the Lib Dems have in her constituency office; in January, Political Scrapbook exposed how Teather had charged £1,700 of Liberal Democrat furniture, insurance and telephone bills to expenses.

The accounts for Brent Liberal Democrats show that the party pays nothing in rent, telephone, insurance and electricity charges, despite sharing such facilities with the Brent East MP.

Elsewhere, this morning’s Guardian reports the Department for Education’s own assessment which shows how the BSF cuts will hit the poorest hardest.

• The impact assessment can be downloaded in full here.