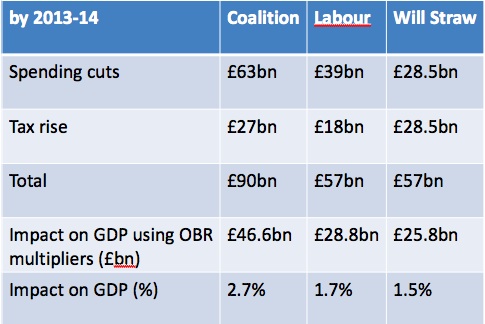 With the Spending Review just four weeks away, pressure is beginning to ramp up on George Osborne with widespread public dissatisfaction over his cuts and a challenge from his colleague, Boris Johnson, over the strategy. Pre-empting the Labour leadership candidates’ debate on deficit reduction, I gave a presentation to the Reform think tank earlier this week setting out my own deficit reduction plan which avoids the masochistic excesses of the chopper Chancellor.

My slides started with four graphs setting out the true story about the deficit, public debt, and the bond market using figures from HM Treasury, the OECD, and Bank of England. Regular readers of Left Foot Forward will be familiar with the argument on which I elaborate below(*) but the essential point is that while the deficit has to come down, there is no compelling economic case for the pace of retrenchment that George Osborne proposes.

But since the deficit has to come down, how can we do so responsibly? My proposal is to stick to Alistair Darling’s plan to cut the deficit in half over four years but split the impact 50:50 between tax and spending cuts – precisely what Norman Lamont and Ken Clarke did in the 1990s.

This would mean £28.5 billion in tax rises by 2013-14 delivered through the 50p tax rate and fulfillment of Labour’s proposed increases to NICs. I would add to that a mansion tax, the full Capital Gains Tax rise proposed in the Lib Dem manifesto, and a doubling of the banking levy.

On the spending side, there is no need for any of the deeply regressive welfare cuts including to housing benefit, the freeze on child benefit, or tax credit reforms (though I do have some sympathy with making 16 the cut off for child benefit). Instead, I would look for an average efficiency of 8.1 per cent across all Government departments aside from DfID. This would, of course, include the Health department which makes up close to one-third of all departmental spending. A significant chunk of this could come from a 3-year public sector pay freeze (around £8 billion according to the SMF).

Before getting into the broad macroeconomic and specific microeconomic policies that are needed to deliver economic growth, this responsible deficit reduction would reduce growth by virtually half as much as the Tory programme. Using the cautious multipliers estimated by the Office of Budget Responsibility (Table C8 of the Budget), I have calculated that my deficit reduction plan would take just 1.5 per cent out of the economy compared to 2.7 per cent by the Conservatives.

The responsible deficit reduction plan also avoids the ideological and masochistic approach taken by the Tories. There is no need for a regressive VAT rise, no need for huge welfare cuts that will disadvantage the most vulnerable, and no need for 25 per cent cuts from unprotected departments.

Given the proximity of the Spending Review, I’d be very interested to hear your thoughts on this approach.

* Labour should take responsibility for running a slight cyclically-adjusted structural deficit from 2005-07. During this period it was irresponsible to allow spending to continue to rise without a commensurate increase in tax revenues. But most of that small deficit was due to capital spending and, crucially, the Tories backed Labour’s spending plans until November 2008.

The record post-war deficit seen since the recession has been due to the financial crash including bailouts for the banks, increases in spending on unemployment and other benefits, and a falloff in tax receipts. Public spending also appears to have shot up on a percentage scale since GDP has fallen by around 6 per cent.

But Britain is in a good position to absorb this increase so long as the deficit is reduced over the medium term. Labour had brought down public debt after it rose in the mid-1990s. We are well placed internationally to absorb the rise and the bond market shows no signs of raising long-term interest rates. (And, no, this is not due to George Osborne’s policies as our own Duncan Weldon and the Independent’s Ben Chu showed yesterday).