Researchers analysing data on average incomes, house prices, life expectancy and educational attainment show that the gap between north and south has grown wider in the recession – and the dividing line is intriguing. 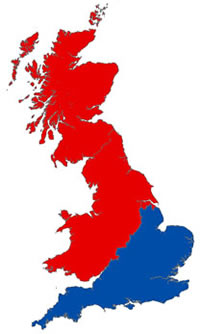 “Britain is a country pulling itself apart” – so says Danny Dorling, professor of Human Geography at Sheffield University and author of a forthcoming book on the north-south divide titled ‘The Economic Geography of the UK’.

“The north-south divide is no longer a vague idea… We have enough information on life chances, health and wealth to say where the line lies and what is happening to it.”

Researchers analysing data on average incomes, house prices, life expectancy and educational attainment show that the gap has grown wider in the recession – and the dividing line is intriguing.

Rather than a neat division across the middle of the country, the ST’s map of inequality tilts, angled on a 2 o’clock-8 o’clock axis, between Gloucester in the south and Grimsby in the north. And as a rule of thumb, anywhere more than two hours from London is likely to be in the ‘north’, (excluding Devon and Cornwall).

Hopes that wealth disparities might be evening-out during the recession are dashed. The ST quotes Shaun French, a researcher at Nottingham University:

“The unprecedented amounts of money spent shoring up UK banks, estimated at £1.3 trillion, has favoured more affluent regions, namely London and the southeast [where the financial services sector is stronger], over disadvantaged regions.”

This depressing picture does not take into account the further impact of public spending cuts or the scrapping of the nine English regional development agencies (RDAs), which are set to be replaced by up to 40 new Local Economic Partnerships (LEPs).

As ‘Mini-Me’ versions of RDAs, there is little prospect LEPs will have the firepower to make an equivalent impact in tackling this structural imbalance in the UK economy. The scale of the divide is enormous: The three northernmost regions of England: the north west, north east and Yorkshire and Humber have a combined output gap with the UK average of £30 billion.

In the rush to hit the government’s timeframe of early September, frantic horse-trading is currently taking place to finalise the shape of the new LEPs. Of course summer is about the worst possible time of year to work-up detailed proposals, so the risk is that what emerges is a patchwork quilt where local rivalries and antagonisms rather than hard empirical reasoning rule the day.

And so the divide grows.

Tinkering with structures at a time when our national economic woes may get worse is a recipe for disaster; as Professor Dorling says:

“The recession is exacerbating those [existing] differences and I suspect the dividing line will also move southwards as the government’s cuts take effect.”

30 Responses to “The growing divide between north and south”