Millions of people around the world are suffering the effects of extreme weather events - matching up to predictions long made by climate scientists of more frequent and more intense weather events due to global warming. 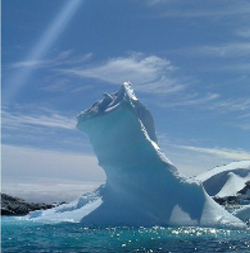 Millions of people around the world are suffering the effects of extreme weather events – matching up to predictions long made by climate scientists of more frequent and more intense weather events due to global warming.

Whilst a single weather event cannot be attributed to climate change, a number of scientists are highlighting that current experiences fit with the climate trends they have been predicting. This is not evident in most mainstream media reporting – so here I examine what has been reported and how this matches what scientists expected.

In Greenland, an iceberg three times the size of Manhattan has broken off the Petermann Glacier. Professor Jason Box of The Ohio State University wrote on his blog:

“This is the largest single area loss observed for Greenland. Petermann is one of a few remaining floating glaciers in the Northern Hemisphere and among the largest…

While it is unreasonable to pin an individual cracking event of a glacier on global warming, even if enormous, the retreat of Petermann glacier is most certainly part of a pattern of global warming.”

The same story was reported by the Associated Press:

“In the Arctic Ocean itself, the summer melt of the vast ice cap has reached unprecedented proportions. Satellite data show the ocean area covered by ice last month was the second-lowest ever recorded for July.”

The floods that hit Pakistan have affected around a fifth of the country’s land mass. Pakistan’s Prime Minister says 20 million people have been made homeless and Maurizio Giuliano, UN humanitarian operations spokesman told the Guardian that at least 36,000 people are believed to have potentially fatal acute watery diarrhoea (AWD) were being treated for cholera.

Roads, irrigation canals and electricity generating stations have been destroyed. The impact on the country’s agriculture is expected to cause food shortages and price spikes. The UN has said the final toll could exceed the 2004 Indian Ocean tsunami, the 2005 Kashmir earthquake and the 2010 Haiti earthquake combined.

The Intergovernmental Panel on Climate Change (IPCC) reported in 2007 that rains have grown heavier for 40 years over north Pakistan and predicted greater flooding this century in south Asia’s monsoon region.

The report also predicted a doubling of disastrous droughts in Russia this century and cited studies foreseeing catastrophic fires during dry years. It also said Russia would suffer large crop losses. Russia is experiencing its gravest heat wave for over a millennium, according to Russia’s Met Office. Wired Magazine recently reported that:

“The Russian heat wave has persisted since late June, with daytime temperatures at least 12 Fahrenheit degrees above normal — and often much more — for over a month. In Moscow alone, an estimated 300 people a day have died. The temperatures in Russia threaten wheat harvests and have sent global prices rising in a manner reminiscent of the lead-up to 2008’s global food riots.”

Wildfires covering some 672 sq miles prompting Putin to introduce an export ban on grain. This in turn has triggered a spike in food prices. The knock-on effect of this is already evident in Indonesia, where the cost of flour has already risen by 10%.

Reacting to the floods in Pakistan, and to the heat in Russia, Omar Baddour, chief of climate data management applications at World Meteorological Organisation (WMO), told Reuters:

“We will always have climate extremes. But it looks like climate change is exacerbating the intensity of the extremes”.

The Jakarta Globe reports that Indonesia is experiencing its most extreme weather events in recorded history with high waves, high winds and excessive rainfall. Indonesian coral reefs have also experienced severe damage – so-called “bleaching” – with reports of around 80% of species there dying and this has been linked to climate change. A spokesman for the country’s Meteorology, Climatology and Geophysics Agency (BMKG) said: “The combination of global warming and the La Nina phenomenon makes everything exceed normalcy.”

The United States too are experiencing tornadoes, floods, heat waves and other out of the ordinary extreme weather events. In May of this year, Tennessee experienced its worst rain deluge for more than 1000 years. Our sister site in the US, ThinkProgress, has also mapped some of the other weather events around America this summer and how they match up to the predictions of the 2009 U.S. Global Change Research Program report.

In China, scores of people have been left dead by mudslides triggered by heavy rainfalls. The IPCC’s report predicted more frequent flooding in this century, and said that rains have increased in northwest China by up to 33 percent since 1961.

In the southern hemisphere, Australia has experienced its hottest decade on record with a recent ‘Big Dry’ of droughts, fires and dust storms.  The Independent spoke of Australia’s ‘global warming ground zero’:

“In the Riverland, one of the nation’s major horticulture areas, dying vines and parched lemon trees attest to critical water shortages. Farmers have had their water allocations slashed during the recent crippling drought; 200 sold up, and many of those who hung on are struggling.”

Elsewhere, Oxfam says that Niger is currently being hit by a “double disaster” of heavy rains and flooding – compounding food shortages caused by a prolonged drought. The Niger River has reached its highest level for more than 80 years and left nearly 70,000 people homeless.

There are a number of instances when scientists have predicted extreme weather events; sometimes when events have taken place and yet received little or no mainstream media attention.