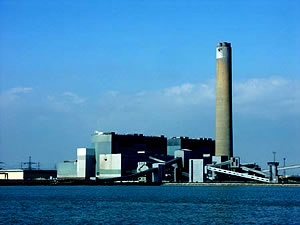 As The Guardian reveals on its front page today, the coalition may be about to U-turn on David Cameron’s flagship green policy of introducing tough new emissions performance standards to stop the dirtiest coal-fired power stations, like Kingsnorth, from being built.

Under intense pressure from big German coal companies like E.ON and the cabal of civil servants who support them, it seems that Liberal Democrat energy and climate change secretary, Chris Huhne, may ‘put on hold’ his government’s promise to introduce an emission performance standard in the new energy bill later this year.

This could, in effect, give the green light for the first new dirty coal stations in Britain for 30 years and reignite the fierce battle about Kingsnorth.

Along with opposition to a third runway at Heathrow, introduction of these emissions standards for power plant was a flagship policy of both the Tories and Lib Dems. Were Chris Huhne to preside over a U-turn on this, it may well decimate perceptions of the Lib Dems as the greenest of the main three parties, infuriate the Lib Dem membership, and represent a major policy reversal.

The introduction of such a standard has been personally championed by David Cameron, George Osborne and Nick Clegg and it also features in the coalition agreement (page 16). When Ed Miliband’s Energy Bill came to Parliament for a vote, as Left Foot Forward highlighted at the time, it was Conservative and Lib Dems who worked together to amend the bill to enable an emissions performance standard. This followed an iconic campaign by groups like Oxfam, Greenpeace and WWF and after MPs inboxes were flooded with emails from members of these groups as well as 38 degrees.

It was David Cameron who first proposed the emissions performance standard, highlighting how such a measure has worked successfully in California to reduce emissions and incentivise clean energy investment.

As The Guardian reminds us today, on June 16th 2006, David Cameron said:

“I can announce today that a Conservative Government will follow the Californian model, and implement an Emissions Performance Standard. This would mean the carbon emissions rate of all electricity generated in our country cannot be any higher than that generated in a modern gas plant.

“A Conservative Government will follow the Californian model, and implement an Emissions Performance Standard. This would mean the carbon emissions rate of all new electricity generation in our country cannot be any higher than that generated in a modern gas plant.

It is not clear why the government have chosen to put this policy ‘on hold’, but most likely is that civil servants who are close to the coal industry have tried to kill the policy.

Huhne urgently needs get a grip on his department and demonstrate that he and not his mandarins are in charge, if he wants to retain any green credibility. That means offering an immediate reassurance that an emissions performance standard will be in this year’s new energy legislation expected in the autumn.

“It’s taken less than 100 days for the coalition to reveal their green claims as an empty gesture. Their decision to postpone their plans to clean up coal shows they were never serious about greening the country’s energy supply. This will create more uncertainty and only further delay the important decisions that need to be made to develop clean coal technology.

“The coalition claimed to be the greenest government ever but they are turning their backs on clean coal and green industries. The government should get on with developing the world-leading framework for clean coal that we set out before the election and the four CCS demonstration plants funded by the clean coal levy passed by parliament.”

The Committee on Climate Change has previously advised that new steps are required to ensure that coal stations do not continue to emit high levels of pollution beyond the early 2020s, and advised Ministers to consider the introduction of a new measure like an emissions performance standard, to help put Britain on track to meet the carbon targets set out in the Climate Act.

34 Responses to “Is Huhne about to approve new dirty coal stations?”