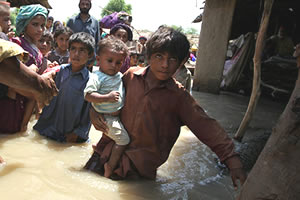 Yesterday The Observer reported that it had received an email confirming that only eight of Labour’s 100 commitments are to be saved. They come as part of the Tories’ drive for ‘value for money’ for UK aid, something we at Left Foot Forward have consistently argued is a bonfire of straw men.

As we reported on Friday, the Department for International Development is already a world leader in aid effectiveness – yet the implementation of the key commitment on Aid Effectiveness is one of 100 that have been dropped.

The Tories said DfID must be independently audited, and we showed that it already is. They said we are wasting away money to Russia and China, and we showed how Labour was already ending those programmes. They claimed DfID wasn’t focused on results, we reported how it was, and how an over reliance on outputs can mean long term solutions are overlooked.

We’ve seen the prime minister let the Gleneagles promises on aid be dropped at this year’s G8, no clear plan for the Millennium Development Goals summit which is just weeks away, and now the dropping of key commitments that would have – and in some cases actually have been – making a huge difference to poor people’s lives.

It is no good for DfID to remain silent on these leaked documents when they pose so many questions:

• What now for budget sector support? If £8.5 billion and £6bn on education and health respectively are to be dropped, how are governments going to be supported to develop their own national systems (and thus become less reliant in the medium-long term on foreign aid?

• Eight million in school by 2010, 55 million with access to water – what ‘outputs’ based targets are these to be replaced by?

• DfID is to drop its commitment to abolish user fees. Does this mean the Tories will push through support for ‘vouchers’ for private schools and the privatisation of health care as outlined in their Green Paper (and slammed by NGOs)?

Trade has been moved out of DfID, and now commitments are to be dropped to quadruple support for fair trade, provide £1bn a year for growth and trade, and support the International Labour Organisation on workers’ rights. They have also dropped a pledge to work with international partners to provide $10bn (£6.42bn) a year for infrastructure in Africa.

“This relatively small amount of UK aid spending was helping some of the world’s most vulnerable in Africa, Asia and Latin America. It is a further signal that the coalition is failing to show real leadership on development.”

• Labour removed forced trade liberalisation as a requirement of UK aid – will aid be kept untied from commercial interests as promised in the coalition’s Programme for Government?

• Why drop support for aid for infrastructure, growth and trade when they provide long term routes out of poverty?

The Programme for Government said nothing on climate change finance. The leaked documents suggest they will keep Labour’s Fast Start climate finance commitment, but they are dropping a raft of other measures.

• How is the Coalition to address climate change, when it is dropping a strategic review on how to integrate climate change adaptation into our aid programmes? Or when it drops commitments to help developing countries develop low carbon technologies and reduce deforestation?

• Will future climate aid be additional – or is just going to be sucked from existing funds?

• Why has support an International Arms Trade Treaty been dropped when the commitment was one promised in the coalition’s Programme for Government?

• Why is the Government to scrap support to the UN’s Central Emergency Response Fund (CERF) – just at a time when the UN is struggling to raise the funds needed to deal with the devastating floods in Pakistan?

The Government promised the aid budget would be ring fenced; if these commitments are to be cut, where and how then is the money to be spent?

Mitchell has said aid should be redirected from other projects to Afghanistan. He’s now dropped a commitment to allocate aid on the principles of “country income and population size”. So how is aid to be distributed in future, exactly how much will be redirected to Afghanistan?

And who is going to spend it? Will aid be re-directed to the MoD, or to the Home Office to pay for immigration costs and student visas, as OECD guidelines allow? Last month the Labour Campaign for International Development (LCID) wrote a letter to the Treasury to ask if the level of aid spent through DfID will remain at 88 per cent – they have still not replied.

Mitchell recently described one of his party’s manifesto commitments on aid as “the sort of thing you say in opposition then rather regret in government… ” some of the world’s most poorest people may yet feel the same about the coalition’s entire approach to aid.

20 Responses to “How will the world respond to the latest climate tragedy?”