One could be forgiven for checking that yesterday wasn’t April 1st after waking up to the news that private equity tycoon and asset-stripper extraordinaire Philip Green has been appointed by David Cameron to head a Whitehall spending review. 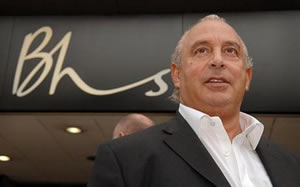 One could be forgiven for checking that yesterday wasn’t April 1st after waking up to the news that private equity tycoon and asset-stripper extraordinaire Philip Green has been appointed by David Cameron to head a Whitehall spending review. Green’s role will, ostensibly, be to identify inefficiencies and savings in government departments. In reality, Green will probably look to do to government what he has done to so many of the companies he has bought and sold – slash and burn.

Green is the multi-billionaire owner of the clothing retailer Arcadia, which includes Topshop and Dorothy Perkins. However, while he may be one of Britain’s most successful entrepreneurs, owning an estimated 12% per cent of Britain’s high-street shops, his billions are the result of massive tax avoidance.

Ninety two per cent of Arcadia group is owned by Green’s wife, Tina, for tax purposes. Green spends most of his time in Monaco, a tax haven, and in 2005 his company paid a £1.2 billion dividend to Tina Green. The Treasury did not receive a penny because she is a Monaco resident.

Of course, despite being morally repugnant, tax evasion the Green way is not illegal. But, as Will Straw points out in the Guardian, ‘it is certainly a poor qualification for heading up a Whitehall “external efficiency review”’.

In 2006, the BBC’s Money Programme reported that Green and his family had saved themselves nearly £300 million the previous year by living partly in Monaco. Green has at least acknowledged that his family does not live in Britain, although he claims that his family has paid capital gains and corporation tax of between £300-400m over the past five years in the UK, although this is still a very small sum for a man estimated to be worth well over £4bn.

Few could deny that Green is a brilliantly skilled money-maker and Arcadia has recorded operating profits of between £250-300m in the last three years despite the downturn. But Green is also the Tories’ fourth so-called ‘government efficiency’ adviser after former BP boss Lord Browne was appointed in June “to improve efficiency in each department”, while Sir Peter Gershon and Dr Martin Read promised the Conservatives £12bn in efficiency savings before the election.

These conflicting egos, all doing the same job, are not likely to achieve anything.

Moreover, while it is unsurprising that the Lib-Con Government of millionaires should have appointed a billionaire to look for efficiency savings, the appointment is surely a PR disaster – for one thing Green is a forceful man with a shorter fuse than Colonel Gaddafi – and his appointment will undoubtedly increase Cabinet tensions, despite the warm accolades that were heaped on Green by Government ministers yesterday.

However, while his over-promoted colleague may be sanguine about this highly controversial appointment, it may push his Lib Dem colleague, business secretary Vince Cable, towards the door marked resignation. Cable was clearly not consulted on the appointment, and when interviewed on Friday, said “there’s a lot I could say on this, but I’d better miss this one out”, adding he was “tempted to comment, but I think I’d better not”.

Indeed, in November 2009, Cable strongly criticised Scottish first minister Alex Salmond when Salmond appointed Jim McColl, also a Monaco-based tax exile, as one of his economic advisors, stating that “there is growing intolerance of British companies and the super-rich who dodge taxes. Having an adviser who is also a tax exile is completely incompatible and totally unacceptable”. With Cable’s recent green paper on bank lending having been watered down by the Treasury so much as to be virtually meaningless, Green’s appointment may be the final straw.

Furthermore, the focus on what are, in relative terms, small government efficiency savings, is a further sign of the coalition’s short-sightedness. As Left Foot Forward’s Will Straw has pointed out, David Cameron wrote in The Sun this week that “benefit fraud is the first and the deepest cut we will make”, blithely ignoring the fact that there is just £1.5bn in benefit and tax credit fraud compared to an estimated £17bn of tax avoidance, evasion and non-payment identified in HMRC’s Protecting Tax Revenues report. In other words, tax dodging dwarfs welfare and tax credit fraud by a factor of more than 10 to one.

In this vein, Paul Kenny, the general secretary of the GMB, struck an appropriately sarcastic tone when he expressed his hope that Green would use his “experience and knowledge to help the government deal with tax avoidance schemes give the government good advice in closing the loopholes”; well said, Paul – but appointing a tax evader to look at ways to cut public spending must be second nature to a party that has spent the past decade being bankrolled by one.