The bottom half of the income distribution will be hit more than the top half by the Coalition's June Budget, new analysis by the Institute for Fiscal Studies has revealed. 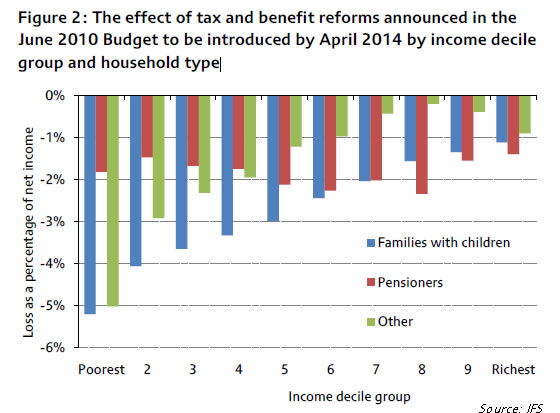 Poorer families will be hit harder than rich families by the Coalition’s June Budget, new analysis by the Institute for Fiscal Studies has revealed. The IFS says that “once all of the benefit cuts are considered, the tax and benefit changes announced in the emergency Budget are clearly regressive” as “they hit the poorest households more than those in the upper-middle of the income distribution in cash, let alone percentage, terms”.

Labour leadership candidate Ed Balls called the analysis, “the final nail in the coffin for George Osborne’s claims to have delivered anything but the most regressive Budget in a generation.” The Chancellor had claimed that his Budget was a ‘progressive Budget’ that would hit the richest more than the poorest, yet the analysis clearly states that:

“IFS researchers have previously cast doubt on this claim, noting that the main measures which will lead to losses amongst better-off households were announced by the previous government, and that the reforms to be in place by 2014–15 are generally regressive“.

The IFS analysis goes on:

“The distributional analysis in the Budget documents also excluded the effects of some cuts to housing benefit, Disability Living Allowance and tax credits that will tend to hit the bottom half of the income distribution more than the top half…

• On June 22nd, Tim Horton and Howard Reed were the first analysts to outline the regressive nature of the tax and benefit changes in the Budget;

• On June 26th, Will Straw and Tom Phillips published data showing that deprived areas would be hit hardest by cuts;

• On June 27th Horton and Reed published a briefing paper for the TUC which concluded that the impact of the Coalition’s spending cuts was “deeply regressive … All households are hit considerably, but the poorest households are hit the hardest”.