Another day, another round of worrying headlines for the deputy prime minister, barely 100 days in office, effectively running the country in David Cameron's absence and now facing one of his most sustained periods of pressure - from the press, Opposition and his own backbenchers over the issue of tax avoidance. 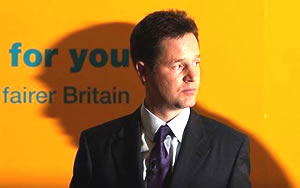 Another day, another round of worrying headlines for the deputy prime minister, barely 100 days in office, effectively running the country in David Cameron’s absence and now facing one of his most sustained periods of pressure – from the press, Opposition and, as Left Foot Forward reported yesterday, his own backbenchers – over the issue of tax avoidance, which he had pledged to crack down on.

Labour leadership candidate Ed Miliband entered the fray today, demanding to know what happened to the Liberal Democrat leader’s committment to raise more than £4.5 billion by clamping down on tax avoidance. In a letter to Mr Clegg, he writes:

During the election campaign you made much of the Liberal Democrat commitment to tackle tax avoidance. You said, if in government, you would raise £2.4bn by attacking income tax avoidance, £1.4bn by halting abuse of corporation tax and a further £750m from stamp duty through tackling offshore registration by non-doms. You claimed that your plans to clamp down on tax avoidance meant that you would not need to raise VAT.

However, since the election you have had a very different message for the country. You have claimed that there is no alternative to the VAT rise, produced no credible plan to make progress on tackling tax avoidance, and we now hear from the Financial Times that HM Revenue & Customs is to soften its stance on avoidance in order to make cuts to its legal budget…

Will you explain to the country why you no longer feel it necessary to tackle tax avoidance? And will you publish a detailed timetable showing the timescales on which you expect to make progress? Those who hear you say there is ‘”no alternative” to your proposed tax rises on poor and middle income earners and to deep spending cuts beyond those you supported during the election campaign, expect nothing less.

“…a less combative approach to resolving tax disputes with businesses in a move designed to cut a mounting legal logjam and unlock billions of pounds tied up in court battles over avoidance. Dave Hartnett, permanent secretary for tax at HMRC, said there had been examples of officials being too “tough” in disputes over tax assessments.

“HMRC is packed full of very intelligent people, but we are sometimes too black-and-white about the law,” he told the Financial Times.

The move, part of a drive for greater efficiency on the part of the cash-strapped department, could produce what Mr Hartnett called a “surge” in revenue over a couple of years, on top of extra money being collected in cases of individual tax evasion.

All of which prompted Tax Research UK’s Richard Murphy to blog:

So Hartnett, the man who just a few years ago said that he’d make sure tax avoidance was ‘no longer worthwhile’ is now going soft on it in the week Nick Clegg said that the coalition is considering the introduction of a new rule “to ensure that wealthy individuals pay their fair share of tax” and a week or so after Cameron says he’s going to make the fight on benefit fraud his number one priority…

…the messaging is dire. What this says is the Coalition is happy for the rich to abuse, will be soft on their abuse, will not be seeking to enforce tax law (that’s explicitly what Hartnett has instructed his staff not to do) and does not care that it was a lack of tax income, not a loss of control of spending, which gave rise to this crisis.

And the Treasury is also using a senior civil servant to snub the deputy prime minister.

As fiascos makers go this mob are proving themselves masters of the art.