As young people collect their A-level results today a double whammy of failed policies has left them in a precarious position, says NUS President Aaron Porter. 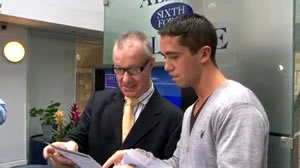 As young people collect their A-level results today a double whammy of failed policies has left them in a precarious position. Top-up fees, that threaten to be raised yet again, leave many feeling unable to mortgage their future on the hope of higher earnings whilst cuts to funding and places mean that those that chose to take the risk may miss out a place regardless of their ability or aspiration.

More than 650,000 people have applied for a place on university course this year, more than ever before, and this is being used by apologists for top-up fees, such as the Russell Group of ‘elite’ universities, as a demonstration that they do not deter young people from going university.

Clearly these people haven’t spoken to any students recently. If they did they would hear story after story of young people at the beginning of their working lives saddled with £20,000 or more of debt and terrified about what the future brings.

The same people say that this means that a further doubling, or even tripling, of fees would bring in the money that universities desperately need and not affect the numbers of young people who apply for a university course.

Once again they are ignoring clear evidence that the doubling of fees demanded by vice chancellors would put a significant proportion of students off going to university and that the prospect of debt affects those from lower-income families significantly more than others.

Even if fees were no deterrent to those from poorer backgrounds going to university, further widening the gap between rich and poor, they would still be deeply regressive.

A sticker price placed on a degree that asks a teacher to pay the same for their degree as a corporate lawyer, both professions that require a university education, unfairly punishes those who gain least financially from their degrees. The system is broken and must be replaced with one that asks graduates to contribute based on their real earnings.

That graduate contribution should be paired with recognition from the government that a well educated work-force is beneficial to society in general, and that this requires better investment. Public investment in higher education in the UK is below the OECD average, 20% less than France, and 10% less than the US.

Other countries recognise that higher level skills are essential for both economic recovery and the future employment needs of the country and continue to increase the number of places at university. The UK has slipped from third to eleventh placed in the OECD in its graduation rates, slipping behind countries like Japan, Sweden, and even Slovakia.

Of the 650,000 people applying for university this year, up to 200,000 will miss out on a place because the government has placed an arbitrary cap on the number of people that can go to university. This is not based on the number of qualified candidates – 3,500 straight A students weren’t offered a university place last year – but rather a lack of willingness from successive governments to fund places for every student with the ability and ambition to go into higher education.

Instead, the current government have compounded cuts made by their predecessor meaning that those students who do get a place at university will be entering institutions struggling to provide adequately for them.

For Ministers to decry poverty of opportunity while presiding over this current crisis is cheap talk, but to stand by and do nothing as young people are left to sink or swim is a dereliction of duty. Abandoning this generation of young people would cause permanent scars to individuals and their families, society and the economy.

More widely, there are clearly serious issues with a funding system that is unable to support the hundreds of thousands of applicants who have made the grade, and leaves a quarter of applicants without a place. The discredited system of top-up fees exploits applicants’ limited options by heaping £25,000 debt on top of the significant pressures they already face. Ministers must introduce a fair, progressive and sustainable alternative that supports rather than penalises students.

An educated workforce is the driver of a modern economy and a Government desperate to get the UK back on sound financial footing should recognise the transformative power of universities and students, and fund their future accordingly.