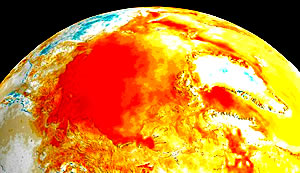 The Daily Mail has become the latest previously ‘climate sceptic’ newspaper to shift its editorial line to acknowledge that climate change is “real and deeply worrying”.

Today the paper’s science editor, Michael Hanlon, who could previously be seen as the UK’s most influential ‘sceptic,’ writes:

“I have long been something of a climate-change sceptic, but my views in recent years have shifted. For me, the most convincing evidence that something worrying is going on lies right here in the Arctic.”

After describing his trip to see the break up of a glacier in Greenland – somewhere he describes as “Global Warming Ground Zero” – Hanlon says:

“So has this remarkable week changed my mind? I still believe climate change has probably been exaggerated, but after coming here it is impossible to maintain that nothing is going on.”

Hanlon already signalled, in the Daily Mail on 24 August 2006, he was changing his position, when he wrote:

“Few scientists now doubt that human activity, the burning of fossil fuels, is having an impact on global temperatures.”

But his latest piece today lies in stark contrast to what he’s previously written.

For example, ten years ago – despite scientists’ then warnings – he wrote in the Spectator,

“As a formula, it is hard to beat – disaster, floods, middle-class greed, dollops of guilt, angst at our shiny cars and our meretricious prosperity, hair-rending guilt that we are raping the planet.

“Like the Romans, we believe the gods will punish us for our naughtiness with thunderbolts and storms, fire and ice.”

“Will the activities of a few pesky homo sapiens with their cars and power stations really cause the earth that much bother in the long term?”

Citing the “subtext” of a Michael Crichton novel for one of his sceptical articles, he even managed to infuriate the then president of the Royal Society and former chief scientific advisor to the government, Lord May, who said:

“It demonstrates the flakiness of the Hanlon case that he should need to rely on a sci-fi writer who has previously warned of the dangers of bringing dinosaurs back to life and of nano-robots turning the world into grey goo.

The Mail’s shift in editorial line today follows similar moves by the Washington Post last week and tbe Canadian conservative National Post newspaper. In turn these followed a series of independent reports exonerating the scientists at the centre of manufactured controversy over so-called ‘climategate,’ and a series of retractions of the articles that formed the basis of that media controversy.